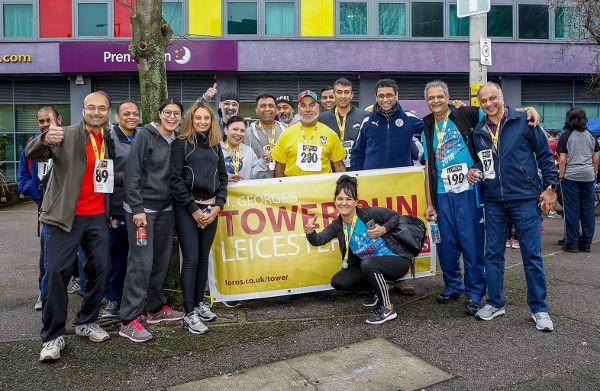 One tower, two new course records as runners raised their game in Leicester on Saturday (10 March) as they raced for the top at the third LOROS Tower Run.

There was a record turnout for this event with almost 400 people running or walking up 20 floors and 351 steps to fundraise for LOROS Hospice. Open to all ages and abilities, it was a personal challenge as well as doing something worthwhile for a local charity that provides care and support to more than 2,500 people each year.

The iconic St George’s Tower was the location for this event with entrants ranging from seven to 72 years old. Designated as a ‘sprint’, the aim was to run up all 351 steps and be rewarded with a glass of fizz for their efforts.


Elliot Slaughter beat the existing course record held by Mark Sims to win the men’s division in 1:27:9. Mark Sims returned to defend his title but had to settle for second place, finishing in 1:32:3. David Harris was third in 1:35:6.

The second new course record was set by Sarah Frost who won the women’s division in 1:49:00, beating the current record of 2:06:93 by a significant margin. Sonja Shakespeare was second in 1:51:00 with Chiara Cristoni third in 2:06:7.

Entrants were full of praise for the event, citing the friendly, encouraging marshals as an important factor in completing the run. This aspect was remarked upon by LOROS Events' Andrew Ward, who also took part, saying: “It felt like a Tower Run community, everyone was really supportive and I’m already looking forward to next year.”