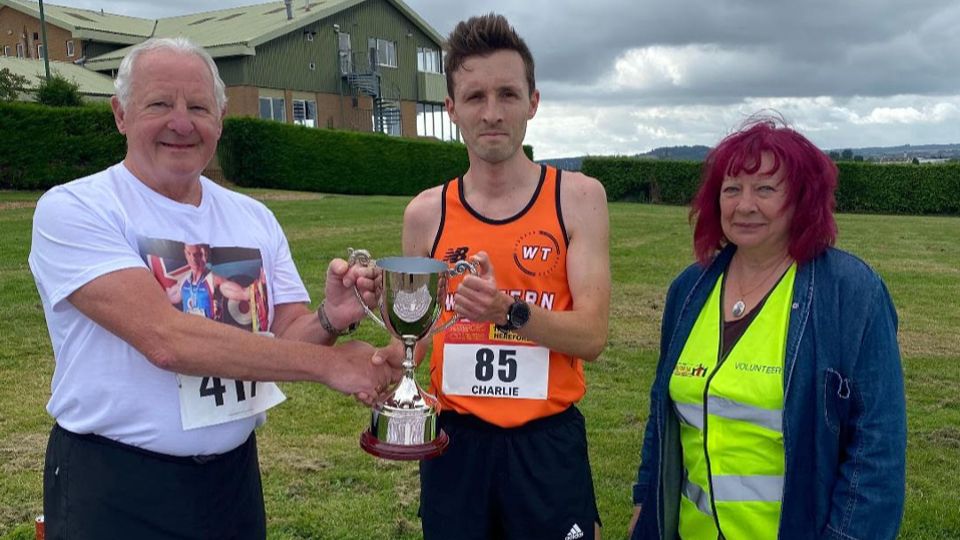 Big hearted efforts from Hereford Couriers in honour of this ultra talented runner.

The generosity of spirit at Hereford Couriers RC resulted in £3,000 being raised in memory of Jon Ward that will be donated to mental health charity Mind. This was a fitting way to pay tribute to ‘Wardy’ as the ex-Courier was known and popular for his kindness and willingness to help others in their time of need.

Jon Ward excelled at all distances, from 5K to Ultra and was an inspiration to many at Hereford Couriers RC. He tragically passed away in June 2020. The Couriers held the Jon Ward 5K and a virtual version in August this year to great success with all profits going to Mind.

Charlie Jones of Western Tempo RC (in the centre of the photo flanked by Jon’s parents Trevor and Linda Ward) won the 5K in 15:03. Donna Morris of Builth & District RC was the winning female in 17:50. The club expressed their gratitude to everyone who took part in the second outing of this fast and friendly race which returns on 14 August 2022. Entries for next year’s race will open shortly.

Chairman Jon Edwards had “hoped to raise a lot of money for a fantastic cause” and his wish came true. He confirmed the amount raised and thanked everyone involved “with the race, those who competed virtually, the many kind donations and everyone at the club for their continued support.”

Additional donations can be made at the Jon Ward Hereford 5K 2021 page via JustGiving.