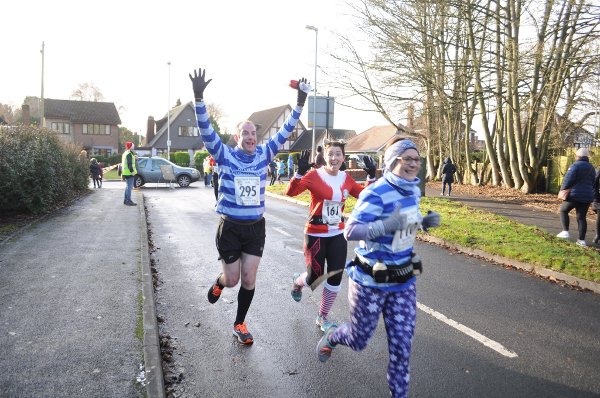 Wet and windy conditions on Sunday (8 December) failed to dampen the endeavours of nearly 600 runners for the benefit of Heart Care. They were in sparkling form at Walsall's Sneyd Striders Christmas Pudding Run.

It was the 34th outing for this festive favourite, smoothly organised, as always, by Sneyd Striders Running Club. The proceeds from this event fund the various activities undertaken by its members and it occupies a special place at the club.

There was a convivial atmosphere and plenty of Christmas cheer as participants dressed in a variety of themed outfits. Served up to them was a choice of two distances: 10 Miles (two laps) and 5 Miles (one lap) on a mainly flat course with a few undulations followed by a downhill stretch in the last 3/4 of a mile. Marshals applauded them with one volunteer warning the runners about a large flooded section, saving them from a soaking!

Carl Stainton of Warley Woods Pacers won the 10 Mile in 57:56. Elizabeth Watters of Birchfield Harriers was the winning female in 1:02:06.

Richard Wright of Wolverhampton & Bilston AC was the winner in the 5 Mile, finishing in 28:38. Leanne Byard of Hinckley Running Club was the female winner in 37:08.

Event secretary John Harvey praised everyone’s contribution saying: “It was a great turn out and fantastic to see all of our members chipping in to make the event a success.”