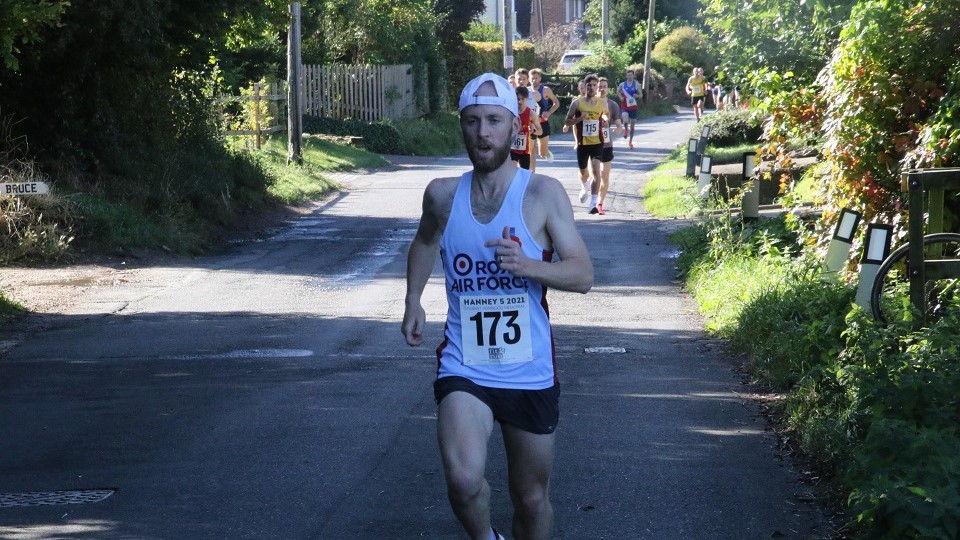 The Hanney 5 has never before clashed with the Virgin Money London Marathon but these are odd times, with the sporting calendar still askew. Having both events on the same day (Sunday 3 October) drew attention to the gulf that exists between local events and the behemoth that is widely regarded as the greatest marathon in the world.

With entry fees from £10 and the manageable, if infrequently found, distance – a perfect stepping stone between 5K and 10K – Hanney 5 has long attracted a loyal following among local athletes and there were 161 finishers (in just over an hour) this year, with nearly 80% being members of an affiliated club.

Race winner Michael Kallenberg, of Cardiff AC, took an early lead and is captured above by official photographer Barry Cornelius breaking away from the pack half a mile into the race. The RAF man has represented GB in the World 50K Championships and set his marathon PB (2:20:18) in Berlin four years ago but now concentrates on the shorter distances.

As Kallenberg took flight, winning the Stewart Horwood Memorial Trophy by 30 seconds in 25:39, there was a spirited scrap for the remaining podium places filled by Harrison Read (Abingdon AC, 26:09) and M40 William Trew (Swindon Harriers, 26:55). The host club's Aaron Burgess (27:04) was just 10 seconds away from an individual award.

Sarah Forbes-Smith (Tri Surrey, 29:49) was among the top-20 who ran faster than 6-min/mile pace for a sub-30 minute victory in the women's race from Frankie Tyrell (Witney RR, 30:55) and Rebecca Frake (31:23). W45 Kate Allred (Eynsham RR, 32:49) was the first of the higher age-group prize winners. Forbes-Smith was presented with the Sheenagh Reynolds Trophy.

Results can be found at runABC South's race listing here