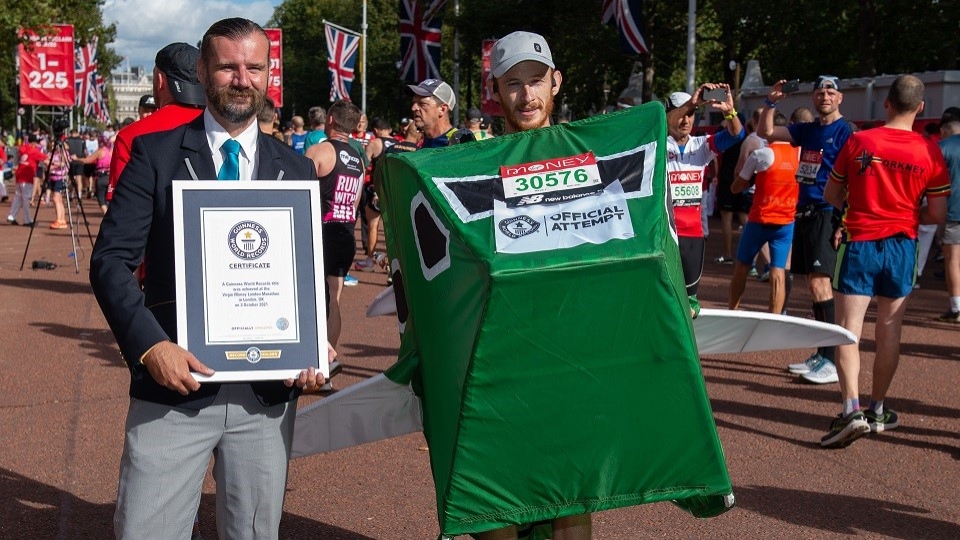 Julian takes his dad's PJs for a record run

There were 34 Guinness World Records set in London Marathon '21

The 41st Virgin Money London Marathon showed its fun and more frivolous side on Sunday (3 October) when 34 Guinness World Records (GWR) were set by suitably costumed competitors. Fastest among them was Tonbridge athlete Julian Rendall – a 44-year-old former GB international ultra runner with a marathon PB of 2:29:25 – who ran the 26.2 miles in 2:51:45 wearing pyjamas.

Julian was interviewed on BBC Breakfast news and he shared that the night attire used were his father's who had passed away the previous year, showing that even in the fun moments there can be a hidden poignancy.

Also starring on BBC Breakfast the morning after the race was Jennifer Graham who took the GWR for the fastest female wearing pyjamas (3:46:12) – her own on this occasion.

One of the more impressive records was Peter Butler-Jones' 2:56:38 wearing wellingtons! Rugby kit was the outfit chosen by Mark Williamson (3:05:45) to set his record. Meanwhile, a pair of handcuffs was the wardrobe selection of Kristina Kucar, who ran a restrained 3:15:53!

Teamwork makes the dream work and never was that maxim more evident than when the six-person caterpillar costume worn by Digby Walker, Benjamin Taylor, Charlie Mason, Edward Holderness, Guy Dixon and Oliver Tipping crossed the finish line in The Mall in 4:34:52.

Neil Murphy (pictured) simply flew around the course dressed as a three-dimensional aircraft in 4:27:44 and he received his world record certificate at the landing strip – sorry, the finish line.

But spare a thought for the feet of Charlotte Sullivan (4:26:18) and Paul Bennett (5:30:20) as they recover from their marathon efforts. Charlotte set a record dressed as a Spanish dancer in a full red and black polka dot 'traje de flamenca' outfit, including the heavy-heeled leather shoes. Paul, in contrast, was somewhat hampered by running his marathon in full-length ski boots!