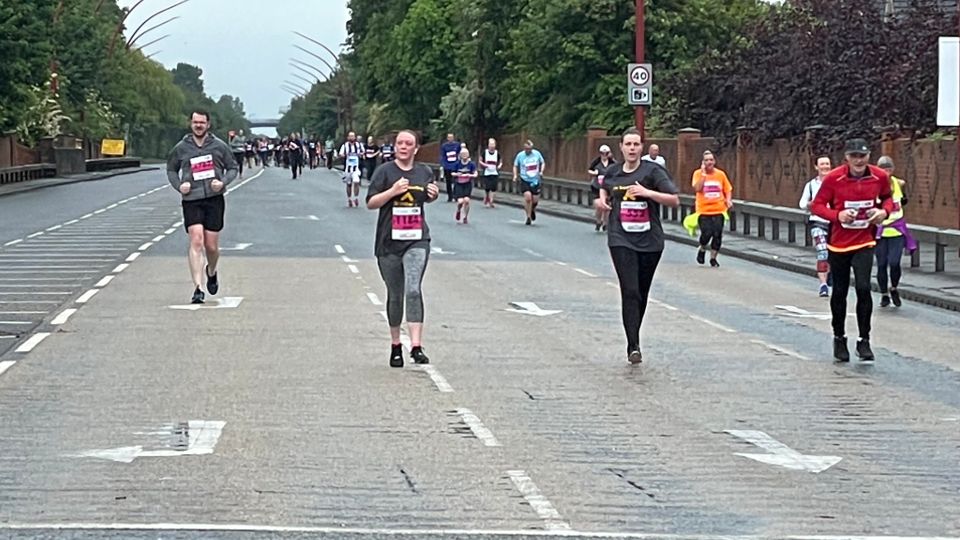 There were smiles through the rain at this community-minded, inclusive race.

The Great Grimsby 10K (Sunday 5 June) was on song as nearly 2,000 runners soaked up the atmosphere (and rain!) at a well organised and supported event. Live music and drumming motivated everyone to the end on a day where they were proud to be British!

Sunday was the final day for the Queen’s Platinum Jubilee with large numbers of people coming together to celebrate across the UK. It was a similar picture at the 7th Ørsted Great Grimsby 10K from Tape2Tape Events that might not have been a sun drenched affair as was the case in 2021 but didn’t lack for enthusiasm, determination and top quality running.

Dance Fit Grimsby conducted a Zumba-style warm up at 8.35am followed by the 10K at 9am. Also at 9am was the St Hugh’s Hospital Family Fun Run that started near People’s Park. Adults and children completed 1K before finishing under the 10K race arch.

The 10K runners dodged the raindrops as they sped along the fast and flat course to cheers, shouts and applause from the local population. A special mention goes to the 1st New Waltham Beaver, Cub and Scout Group for their vocal encouragement to runners as they passed under Peaks Parkway Bridge.

William Strangeway of Lincoln Wellington AC was the winner in 31:55 followed by teammate Matthew Bowser in 32:07. Carl Jones of Richmond & Zetland Harriers took third in 32:28.

Laura Smith of Hallamshire Harriers AC was the first lady in 35:05. Lindsay Skinner and Nicola Curtis from Off That Couch Fitness joined her on the podium, taking second lady in 35:21 and third lady in 35:56.

View all the results via the runABC Midlands Race Listings page.

The t-shirt, medal and cake received a ‘thumbs up’ by the finishers as did the day itself which was memorable for all.