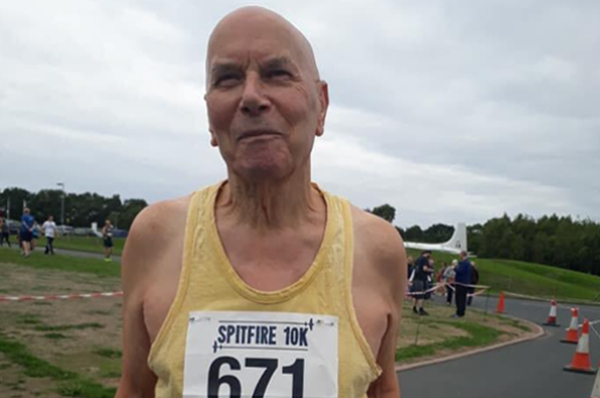 It was a wizard day out for everyone who took part in the sold out Cosford Spitfire 10K yesterday (Sunday 2 September). Amongst those taking part was 80-year-old ex-RAF physical training instructor Jim Hussey.

Known as ‘Jim the Legend’ at Telford parkrun, James Hussey was the oldest competitor at the Cosford Spitfire 10K, putting his best foot forward to celebrate 100 years of the RAF. Age is no barrier for this gentlemanly runner who crossed the finish line in 1:16:44 and is has completed 246 parkruns to date.

The 2017 Spitfire 10K sold out causing the organisers, Nice Work (on behalf of the Royal Air Force Museum, Cosford) to increase capacity at the 2018 event. The popularity of this event and the fact it took place in the centenary year of the RAF meant places were quickly snapped up for this year’s race.

The odds of a PB were high, due to the sunny conditions and a mainly flat course that included the runway. There was a new Family Run at 9.15am followed by the main event at which started at 10am outside Hangar One and continued around the RAF Museum site, passing several famous aircraft before heading out onto the airfield.

Dominic Murray landed a win in 34:59. Robert Eaton of South Derbyshire RR was second in 35:22 followed by Iain McDonald of UKRunChat in 36:13. Joanne Watson of Cleobury Mortimer RC won the women’s race in 41:41 followed by Sam Chilvers in 42:52. Ceri Card of Lawley RC was third in 43:46.

All finishers were presented with a commemorative medal to mark the 100th birthday of the RAF. The impressive medal features a Spitfire and is inscribed with 'celebrating 100 years of the RAF; so set to be a collectors item. The RAF theme continued with a number of runners dressed in WWII costume (flying helmets and googles, handlebar moustaches etc)