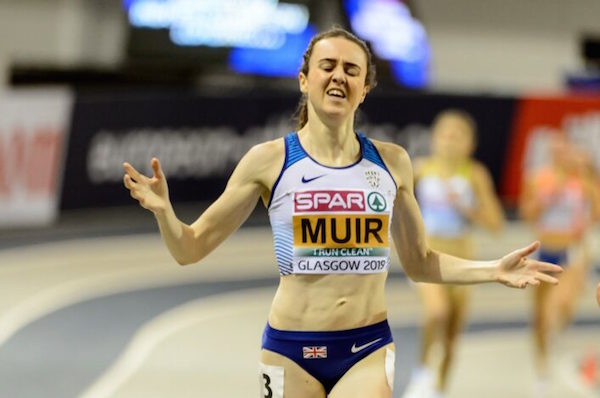 ‘Emirates roar’ spurs Scots on to Euro medals in Glasgow

The European Indoor Athletics Championship drew to a close in Glasgow last night (Sunday 3 March) with a fine haul of medals for Scottish athletes.

A record nine Scottish runners were selected by British Athletics to form part of the 48-strong GB and NI team – the largest Scottish contingent at these championships for more than 50 years.

Great things were expected at the championship from an on-form Laura Muir, and she more than delivered.

On the first day of the competition on Friday, she lapped nearly the entire field to retain her 3000m title, won at Belgrade in 2017, just three hours after qualifying for Sunday’s 1500m final.

And when it came time for that final – the last individual race of the championship – her performance did not disappoint the home crowd. Muir easily retained her European indoor title at that distance too.

She told the BBC Sport: "I'm so relieved. I set myself a big test this weekend – there was a lot of pressure. It's so special [to win in Glasgow]. To be on my home track is surreal.”

There was success for Scotland in the men’s 3000m too, as Chris O’Hare took silver after a final, photo-finish push over the line. He told scottishathletics: "With 200m to go I thought I’ve got bronze and tried to give it everything I had to be on Henrik [Ingebritsen’s] shoulder. It took me a lot to get on his shoulder, but then round the bend the crowd just erupted. That roar inside the Emirates Arena really does kind of pick you up and chuck you towards the line."

There were also medals for Scottish runners in the last event of the championship on Sunday night, as Zoey Clark and Eilidh Doyle helped Team GB &NI bring home the silver in the women’s 4 x 400 m relay.