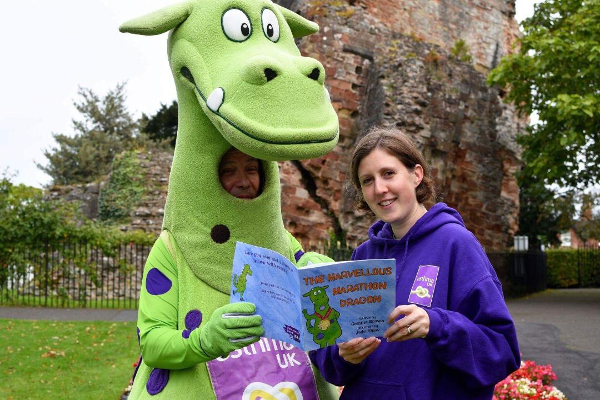 On 22 April, Gemma Brown will mark 10 years of fundraising in memory of her son Cameron by running the Virgin Money London Marathon. The author of ‘The Marvellous Marathon Dragon’ will be fired up and raring to go.

In 2008 Gemma and Ashley Brown tragically lost their two year old son Cameron to a severe asthma attack. They set up a charity in his name to raise awareness of this common lung condition and fundraise on behalf of Asthma UK. To date, they have raised over £75,000.

Three years later, they watched a friend complete London Marathon for Cameron’s Fund which made a lasting impression on Gemma who wanted to enter and celebrate a fundraising milestone. Her running journey started with a Couch to 5K programme in 2015 followed by her first parkrun then 10Ks. During this time she joined the Run Mummy Run community and found its advice and support invaluable which continued when she stepped up to half marathons in 2017 and now the marathon. She is part of a group of runners called ‘Team Cameron’ who will tackle the 26.2 mile distance in the company of thousands of others.

Gemma’s other goal was that of writing a children’s book inspired by Cameron, Asthma UK and London Marathon. The main character Drago is based upon the exploits of Puff the Asthma UK dragon (AKA 62-year old Dana Power from Bridgnorth) who has run numerous half and full marathons for the charity.

She self-published this book which launched in October 2017 with 75% of the proceeds going to Asthma UK. For anyone wishing to purchase a copy, visit the Marvellous Marathon Dragon website.