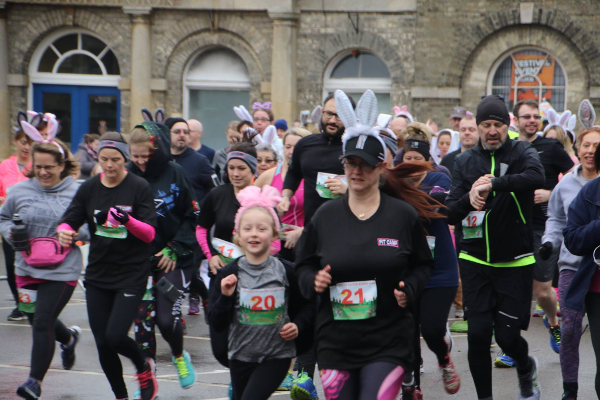 Haring Around At Thetford

Run, rabbit, run was the mantra for those taking part in the Thetford 5K on Easter Sunday (1 April). Young and old alike did their bit at this charity fundraiser in Norfolk.

Sunday was forecast as the best and driest day of the Easter weekend and kept to its word as individuals and families gathered in the Market Place for the Thetford 5K Easter Bunny Run. The event began with a lively warm up courtesy of Shannon’s Zumba Fitness to get everyone ready to run.

Thankfully, there wasn’t a farmer with his gun to chase the long eared entrants who set off at 10am from the Guildhall Market Place and followed a historical route around the town. Seasonal fancy dress was on display with bunnies and chicks a popular theme although one runner appeared as ‘Biggles’ who may have been celebrating 100 years of the RAF.

There were prizes for the best fancy dress, a seasonal medal, hot cross buns and hot/cold drinks afterwards which were welcomed by the runners. And for those with a sweet tooth there were home-made cakes at the Guildhall Tea Room.

The Thetford 5K Easter Bunny Run is one of several events from Run Breckland, a not-for-profit community group who fundraise for local charities in the area. Thetford and District Dementia Support (TADDS) were their chosen cause with Sunday’s run raising over £350 for TADDS plus £50 each for the Army Cadets and First Aiders.

Run Breckland would like to thank everyone involved with a special mention of the volunteers who gave their time on Easter Sunday to deliver an enjoyable event.