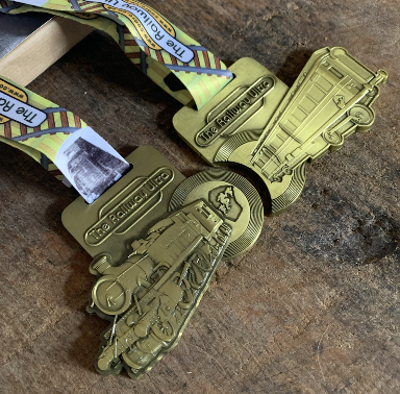 Saturday’s (15 February) Winter Railway Ultra stayed on track despite Storm’s Dennis’s best efforts to derail it. An earlier start time was a good move for many.

People travelled from near and far to take part in the Winter Railway Ultra - there is a summer version on 1 August – organised by How Hard Can it Be Events & COD RC. Wind and rain weren’t going to stop them from seeing if their spring marathon training was on the right lines.

Conditions were anything but spring-like as following on from last weekend’s tempest was another weather system on the way that was forecast to be equally damaging. Storm Dennis was due to arrive on Saturday afternoon and organiser Denzil Martin gave people the option of starting at 9am in order to complete most or all of their run before the storm. The 10am start still remained for runners who preferred to set off later.

This multi-lap event was held at Coalport along a disused railway line between Ironbridge and Bridgnorth near the River Severn. The out and back lap course was 9.4 miles on a hard stone surface with a camber and several potholes.

There was the choice of 9 miles, 19 miles, 28 miles and 36 miles and a record was kept of how many laps each runner completed. There was rain and gusts of wind in exposed sections but also smiles, a ‘thumbs up’ and encouraging words between runners as they passed each other.

Every finisher received a steam locomotive themed medal and had the satisfaction of a job done in challenging weather without hitting the buffers.

Image courtesy of How Hard Can It Be Events & CODRC