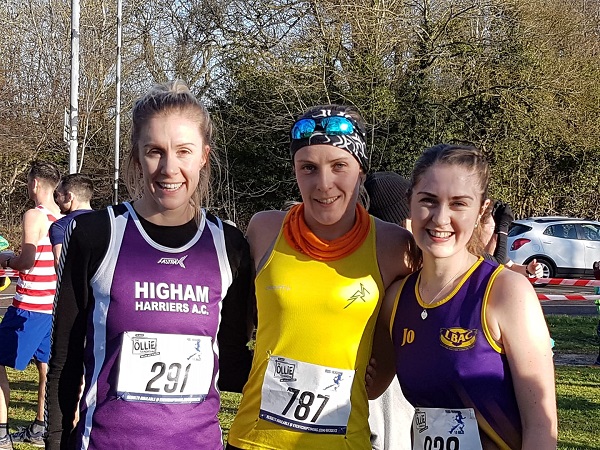 The Fred Hughes 10 was another sold-out spectacular on Sunday (19 January) with 1,000 entries and 919 finishers in two and a half hours. Contrast our picture above of the top three women smiling in the sunshine with the blizzard conditions competitors faced last year (pictured below)!

St Alban's Striders were promoting the 28th annual 10 mile road race, named after their club chairman Fred Hughes, who was killed in a road accident in October 1993. The race supports the OLLIE Foundation – a local charity dedicated to stopping teenagers and young people from taking their own lives. A collection raised £750 in addition to runners' own fundraising efforts.

Fred Hughes 10 is well prepared for the weather. There are two alternative courses – both certified accurate – so changes can be made if any part of the route is flooded. Fortunately, the recent rain gave way to a gorgeous sunny day and it was game on for the PB chasers.

There was very little to choose between 10-mile debutant Alex Bampton (Highgate Harriers) and Matt Kitching (Queens Park Harriers) at the head of proceedings. Bampton (52:36) preserved an 11-second margin over Kitching (52:47 PB) with St Alban's Strider Paul Adams (54:20 PB) next to finish in King Harry Lane.

Hannah Oldroyd (Ribble Valley Harriers, 61:43) was a clear women's champion and winner of the £200 first prize – check out that race winning smile above (#787). RBH are sponsored by Norman Walsh shoes and based in Lancashire's Ribble Valley.

The closest finish of the day was for the remaining women's podium places. Johanna Sharples (Leighton Buzzard AC, 63:17 PB) had just five seconds to spare over Rachel Doherty (Higham Harriers, 63:22) on the finish line at St Columba's School.

The race once again incorporated the Hertfordshire County Senior 10 Mile Championships and there was a technical T-shirt for all finishers and complimentary post-race refreshments.

The leading 22 men broke 60 minutes and nearly 600 runners were inside 90 minutes despite the undulating nature of the two-lap course.