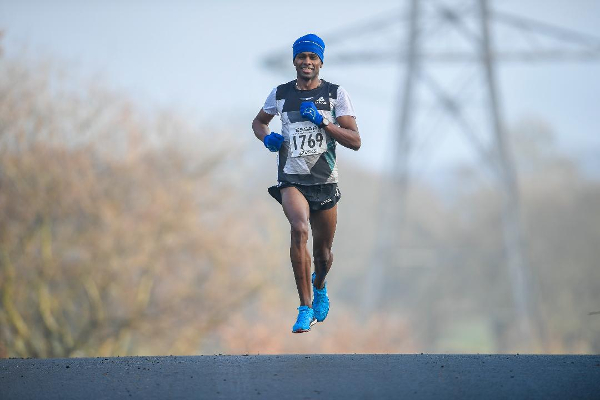 There was a hefty amount of grit amongst runners as well as on the roads at a cold and foggy Four Villages Half Marathon (Sunday 19 January). They kept their feet around the hilly course though the men’s winner appearing to be flying...

Temperatures were around freezing point as over 1700 runners waited for the 37th Essar Four Villages Half Marathon to begin. The organisers, Helsby RC had gritted the course in preparation for the race and in keeping with their green credentials, had paper cups and goody bags and recycling stations at the start and finish.

At 10.30am they headed off along an undulating, closed road route through the four villages of Dunham on the Hill, Mouldsworth, Manley and Alvanley.There was plenty of support at the three water stations but the one at Mouldsworth had its own impromptu choir courtesy of Ashton Scouts and their renditions kept everyone going.

The song 'Walking In The Air' would have been appropriate for last year’s winner Mohammed Abu-Rezeq whose flying feet propelled him to victory in 1:06:14. Michael Kallenberg of Cardiff AC was second in 1:07:03 and Matthew Shaw of Chorlton Runners third in 1:10:19.

Eleanor Whyman-Davis was in winning mode in the women’s race, crossing the line in 1:14:31. Kirsty Longley of Liverpool Pembroke & Sefton Harriers & AC was second in 1:16:34 and Sophie Wood of Sale Harriers Manchester third in 1:18:16.

A few boxes of medals were misplaced causing a delay in handing them out; however, they turned up and Helsby RC will post medals to anyone who missed out on one. Club member Tracey Woods gave her medal to 17-year old Mathew Larkin who looked set to miss out after completing his first half marathon. Tracey's gesture made Matthew's day.