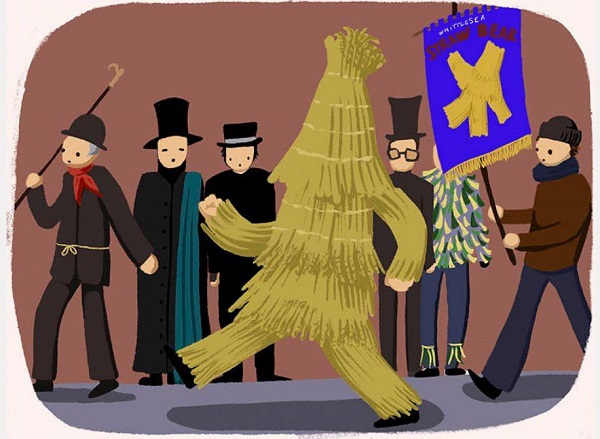 From a secret location in London, the next big thing in virtual running is under way. Straw Bear Striders have forged links with OpenTrack to bring us the first ever Fraud-Bear Virtual 5K Championships with a Tour de France influenced theme.

runABC South has tracked down the organisers who may just have some connection with Freud Bar, Shaftesbury Avenue in the fashionable Seven Dials district – an intriguing network of seven atmospheric streets that link Covent Garden with Soho. This much-loved minimalist bar is set in a concrete cellar from where potent classic cocktails are dispensed in normal times.

During the 19th century Straw Bears – men or boys clothed in a layer of straw weighing up to five stones – were a familiar sight in Britain on Plough Monday and the tradition is continued today at the Straw Bear Festival in Whittlesea, Cambridgeshire each January, where the Straw Bear parades with his 'keeper' and numerous Morris dance sides.

Far from lumbering around in overweight costumes, Straw Bear Striders opt for minimalist clothing and an emphasis on the 'Striders' part of their club name for this virtual initiative. Unlike the recent highly successful Virtual National Road Relay, a decent descent is positively encouraged in the Fraud-Bear Virtual 5K!

Some spectacular times are anticipated as runners are set to go downhill fast, while observing all relevant Government and Public Health guidelines. So no driving to run down a mountain, unless, of course, you live near a mountain! Times, verified by Strava/Garmin Connect and uploaded to OpenTrack between Saturday 18 April and Thursday 23 April will expect to show cadence of 160-210 steps per minute and a considerable loss of altitude.

Sounds like a whole lot of fun for just £1 entry fee to cover admin costs for OpenTrack.

Entries are available until Thursday (23 April) at Open Track here