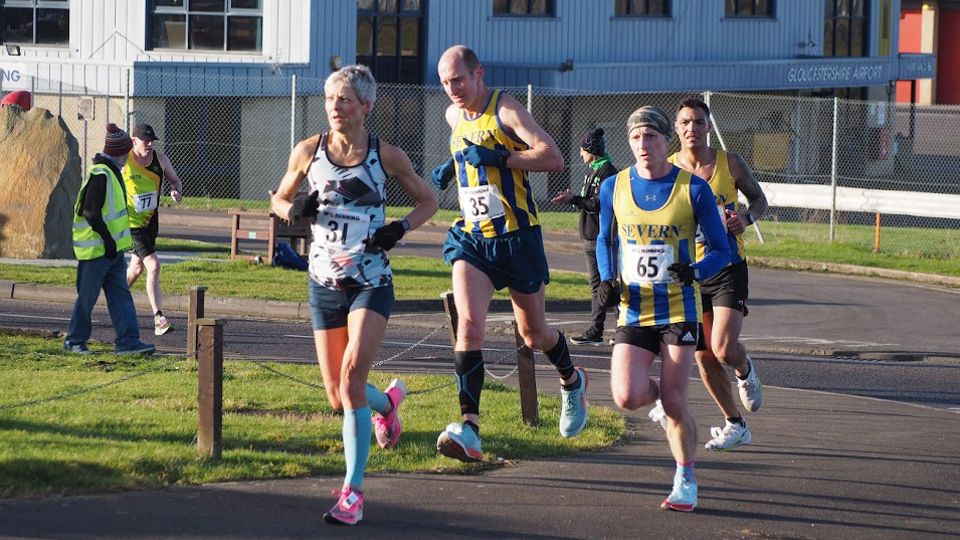 Kallenberg and Carter soar at Staverton

Wins for both and a new course record for Fiona Carter

Michael Kallenberg and Fiona Carter stormed to victory at the Staverton 10 Mile (Sunday 30 January) as over 200 runners got up to speed at this fast and flat race. They were helped on their way by super efficient marshals...

The Staverton 10 Mile was grounded in 2021 due to the pandemic but it flew back this year to the delight of runners and organisers CLC Striders RC. This was the 6th outing for this event where places had sold out beforehand - it’s popular with runners preparing for a spring marathon/half marathon – and there were no interruptions from Storm Malik or Storm Corrie, thankfully.

The second race in the Gloucestershire AAA Road Race Series 2022, the Staverton 10 Mile attracts a good mix of runners, from the experienced club athlete to the first timer at the distance. Race HQ was at the appropriately named Aviator Inn at Staverton airport: this acted as the registration point and a post-race venue serving food and drink.

Off they went at 9am to complete a two lap course around the village of Churchdown on open roads apart from a small section through farmland on the return to the airport and the finish. Marshalling is a notable aspect of this event with volunteers praised for their encouragement and willingness to help and this was in evidence on Sunday as they cheered everyone from start to finish. Their support was second to none.

Michael Kallenberg flew to a win in 50:19 and a gap of more than three and a half minutes between him and Rob Green. Green of CLC Striders RC took second place in 53:56. 2019 race winner Steve Kenyon of Gloucester AC was third in 54:39.

Fiona Carter of Lonely Goat RC was the first female in 1:02:41 with a new women’s course record. Kate Telford of Pershore Plum Plodders was the second female in 1:04:28 with Fee Maycock of Western Tempo RC third female in 1:04:56.

The full results are available via the runABC Midlands Race Listings page.

Next in the Gloucestershire AAA Road Race Series is the Berkeley 20 on Saturday 19 March.