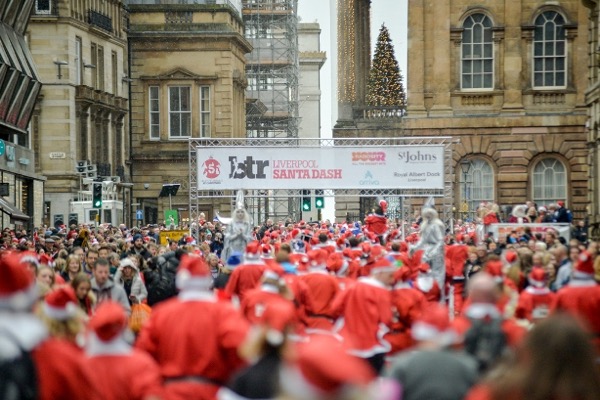 The 15th annual BTR Liverpool Santa Dash on Sunday (2 December) saw the city transformed into a sea of red, blue and mini Santas. Close to 7,000 Santas from across the globe, including representatives from France, Gibraltar, Norway and Switzerland, all took part, making the Santa Dash the UK’s biggest festive fun run.

This year’s route changed due to ongoing road works in the city, but it gave Santas the opportunity to run along The Strand and through the Grade I Listed Royal Albert Dock Liverpool estate for the very first time.

An excited and colourful field of runners gathered on Canada Boulevard at Pier Head Liverpool – part of the city’s iconic UNESCO World Heritage Site – before embarking on their 5k festive fun run.

As part of this year’s event, the Santa Dash was chosen by Channel 5 as the official fundraising event partner for the national TV station’s new festive campaign, Help The Animals at Christmas. The initiative showcases the work done by the RSPCA, Scottish SPCA, Blue Cross, The Donkey Sanctuary and Wildlife Aid Foundation.

BTR race director Alan Rothwell commented: “What an incredible day – 7,000 Santas dashing through the streets of Liverpool city centre, it doesn’t get much better than that. Our dashing Santas didn’t even let bad weather dampen their spirits on what proved to be a very memorable day. Christmas has officially started in Liverpool – well done to everyone who took part.”

Channel 5 will broadcast footage of the Santa Dash as part of a Help The Animals at Christmas television special, broadcast from Salford’s Media City at 8pm on Friday 21 December.