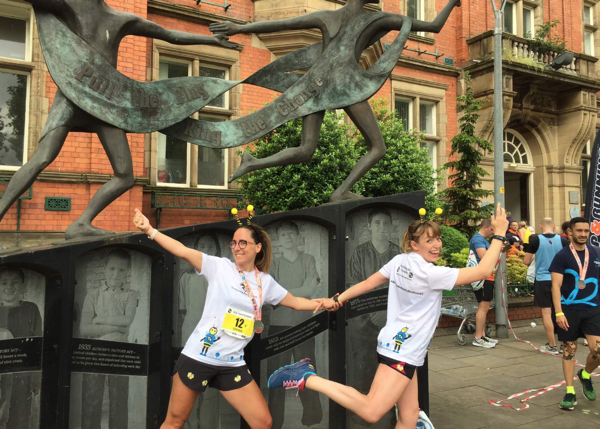 The Tour of Tameside produced yet another thrilling four days of racing (13-17 June) and highlighted once again why the North West is such a mecca for running events. One of the stand-out features of the most recent event was the overwhelming support for The Running Bee Foundation, a project founded by organisers Sports Tours International to encourage people within their communities to become more active.

Founded by Dr. Ron Hill in 1983, the Tour of Tameside was re-introduced in 2015 and proved to be an immediate success with over 500 runners taking part. Since then, the event has reconsolidated its status and has seen its fields increase year on year.

The Tour kicked off with over 600 runners on Thursday (13 June) at the X-Trail 10K in Daisy Nook and Park Bridge Country Parks. It was a thrilling way to start the event with a nail biting finish between old rivals as Mohammed Abu-Rezeq (35:42) just shaded it ahead of Gareth Raven. Kirsty Longley was first female in 39:29.

Moving onto Stage 2, on Friday evening, was the infamous ‘Hell on the Fell’ in Copley, which saw close to 500 compete. It was much the same at the front as Abu-Rezeq and Raven fought it out, with the former just prevailing (36:32) three seconds ahead, while Longley (41:10) was a comprehensive winner in the female competition.

Stage 3 saw competitors tackle the ‘Hero Half Marathon’, which again saw a repeat of the Abu-Rezeq, Raven and Longley standings. The final stage was the most popular of the quartet as over 680 took part in the Dr. Ron Hill Hyde 7, which took runners along the Longdendale Trail, a disused railway line, ideal for achieving a PB time.

While the men repeated their standings, there was an upset in the female competition as Laura Hesketh (41:44) narrowly ousted Longley (41:48) to grab first. Overall, it was familiar faces Abu-Rezeq and Longley who claimed the 2019 titles. On the last leg of the event, Dr. Ron Hill was present and on great form, speaking of how running keeps you fit and healthy.

There was an incredible amount of support by ambassadors and fundraisers for the Running Bee Foundation. The project, which was launched in December 2018 aims to improve the health and well being of local residents and to help tackle the challenge of childhood obesity.

All profits from the Tour of Tameside, and Sports Tours International’s other eight running events, will go to The Running Bee Foundation to be invested back into the communities where these events take place.