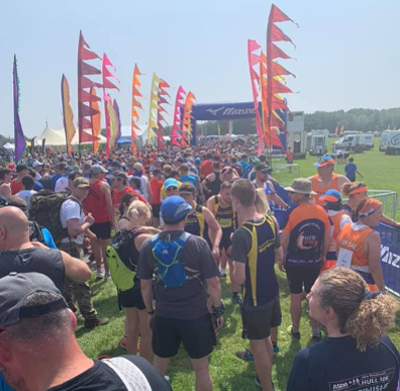 Hot around the clock at Endure 24 Leeds

It was an unforgettable weekend for 24 hour running people at Bramham Park, West Yorkshire. Thousands including myself soaked up the sun, the atmosphere and the laps at Endure 24 Leeds (Saturday 29 to Sunday 30 June) writes Jane Holt.

Known as ‘Glastonbury for Runners’, the Mizuno Endure 24 is a solo, pairs and team relay race from Racesolutions held at two locations – Reading and Leeds. The Reading event was a success and expectations were high for Leeds...these were more than met at a professionally organised event that started and finished on a high note.

Bramham Park and its grounds played host on what was the hottest weekend of the year as runners of all backgrounds completed multiple laps of a scenic and undulating 5 mile trail course in 24 hours.

There were DJ’s, sports massages, yoga, wood-fired pizzas, coffee and crepes to nourish body and soul and outstanding support from marshals and volunteers throughout. Even the King himself, Elvis Presley (Vdub Vibes) did his bit, entertaining runners while offering high-fives as they passed. The song “It’s Now or Never” would have been apt...

On Saturday at 12 noon, everyone streamed away under the giant blue Mizuno arch, flanked by cheering crowds and multi-coloured flags flapping in the breeze. Temperatures kept rising, reaching 28/29 degrees at their maximum and this combined with the humidity added to the challenge. Hydration was of prime importance and efficiently catered for by the North Norfolk Beach Runners and their Wild West saloon bar a.k.a. the Mizuno support station.

There were many tired bodies by the end matched by a sense of achievement and a desire to do it all again next year.