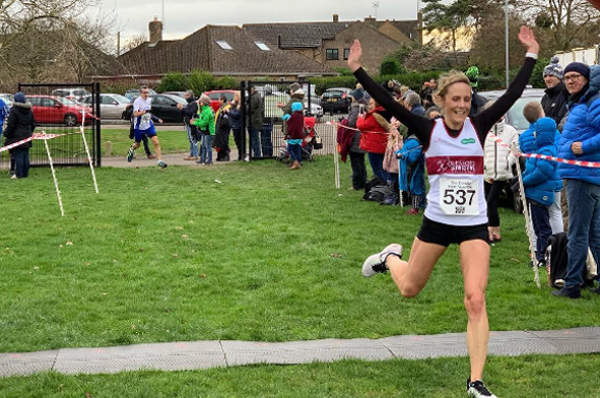 Emily Foran blasts to a win at Oundle 10K

Windy weather didn’t slow Emily Foran down at the Oundle New Year 10K yeterday (Sunday 13 January). She flew around this sold out fundraiser in Northamptonshire.

One of two races in the market town of Oundle, the other a 20 mile event in March, this New Year 10K was organised by Nice Work and raised funds for Oundle Primary School. Aimed at new and experienced runners alike this race was a test for those early season fitness levels especially after last month’s festivities. They faced a ‘gently undulating’ course in an attractive setting.

Nearly 500 runners set off at 10am from Oundle Primary School to follow a picturesque route on wide country lanes around the villages of Oundle. They ran through Glapthorn and Cotterstock, climbing a few hills along the way before finishing back at the school.

It was the best of starts to the New Year for Emily Foran. The Sleaford Striders AC runner was the fastest female in 40:51 followed by Jenny McBain in 41:39. Natasha Brown of Kettering Town Harriers was third in 41:50.

The men's race was won by John Uff of Peterborough AC in 35:13. Matthew Kingston-Lee of Grantham RC came second in 36:42, only 6 seconds ahead of his teammate Ian Williams who was third in 36:48.

There was a bespoke medal for every finisher along with a sense of achievement, providing an antidote to the back-to-work blues.