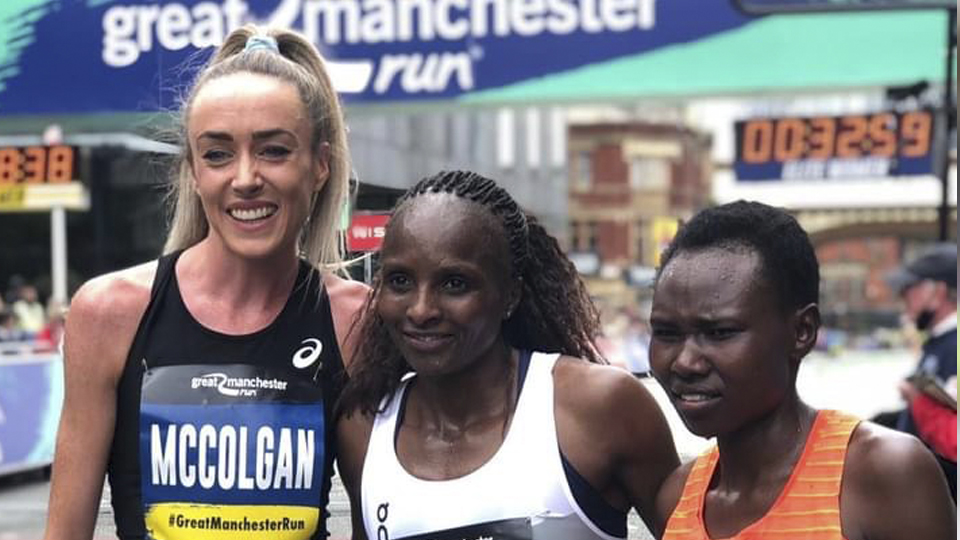 20,000 runners were mad for it in Manchester at the weekend, none more so than our very own Eilish McColgan...

On Sunday, over 20,000 runners lined up in Manchester to take on the Great Run challenge, they were running alongside elite athletes and with the support of thousands of volunteers and spectators.

The event was preceded by a minute’s applause in recognition of the 5th anniversary of the Manchester Arena attack, led by Freya Lewis, who suffered devastating injuries in the attack and Cllr Bev Craig, leader of Manchester City Council. Some well-known faces joined the masses with the Mayor of Greater Manchester, Andy Burnham, taking on the 10K alongside a team of NHS Staff from Manchester University Foundation Trust.

Great Run Company's, Paul Foster said, “It’s been incredible to see so many fantastic runners crossing the line on Deansgate today. As always supporters were out in force cheering them on every step of the way. We’d like to thank our partners Manchester City Council and the people of Manchester for making this a day to remember.”

There were some spectacular results in the elite race with a great day at the office for Eilish McColgan who, despite finishing second to Kenyan powerhouse Hellen Obiri, smashed Paula Radcliffe’s longstanding British 10K record on the road, by two seconds. Obiri’s winning time of 30:15 and McColgan’s second place time of 30:19: were also the second and third fastest of all time in a women's only race. Kenyan Ruth Chepngetich took third place in 30:29

Eilish commented: “After coming so close to the British record in London I’m so happy to have broken it here today. We went off super-fast but I wanted to keep something for the final stages and I’m glad I did. Thank you for all the support on the course, it was so incredible, I love running in Manchester.”

In the Men’s race, Jake Robertson of New Zealand took first place in 28:06, ahead of Australian runner Jack Rayner in second in 28:16 and Spain’s Antonio Abadia in third in 28:21. The first British male was Abdulqani Sharif (Liverpool Harriers) who was 5th in 28:29 - a PB by nearly two and a half minutes (his previous best was 30:57 in 2018)!

The 20th Great Manchester Run will take place on Sunday 21 May 2023 and organisers are currently offering an early bird discount on entry for both distances. For more information visit the Great Run website.