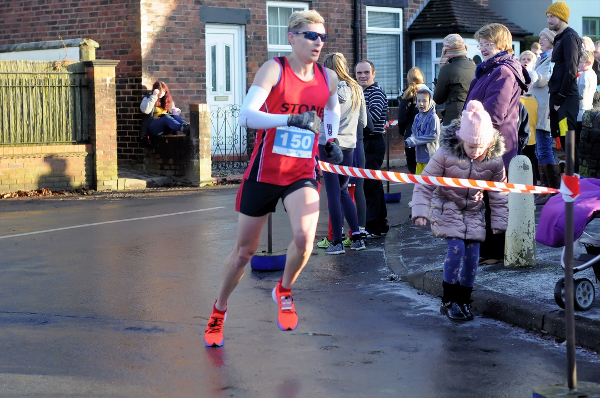 Christmas came early for Daniel Soltys as he ended his season with a sweet tasting win at Saturday’s (30 November) Cheddleton 10K Christmas Pudding Race. One of his prizes needed its own set of scales and weight category.

It was another successful outing for the 36th Cheddleton 10K Christmas Pudding Race, smoothly organised by Stan Winterton and the Cheddleton Local Committee with all proceeds to Cancer Research UK. This event is well supported by the local running community who enjoy the challenging course and luxury Christmas Pudding at the finish.

There was a 2 Mile Fun Run for all ages at 13.40pm followed by the 10K at 2pm. The 10K consisted of three, traffic-free laps on hilly country lanes around the village of Cheddleton and the local community braved the cold to applaud everyone’s efforts.

Daniel Soltys of Stone MM won in 33:43 and received a trophy, cash, Christmas pudding, and, a rather large Christmas cake that weighed around 3.4kg! Dean Richardson of Stoke AC was second in 33:54 and Carl Moulton of Boalloy RC third in 34:27.

Daniel’s next challenge is working his way through that Christmas cake with a little help from his friends.