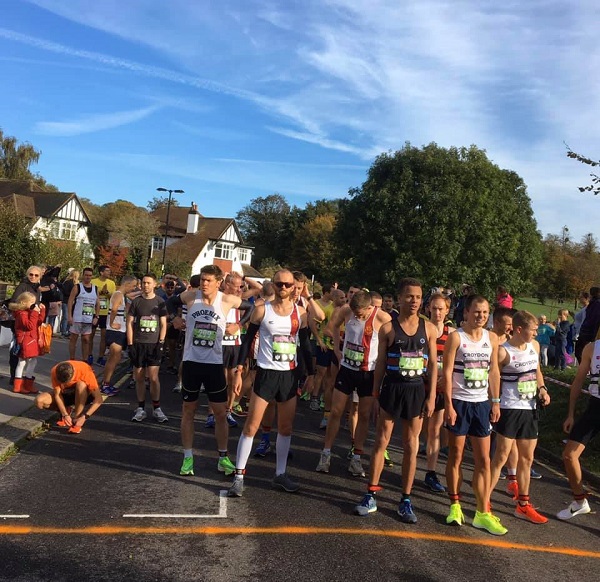 A simple painted line on the road marked the start of the Croydon 10K on Sunday (27 October) where just over 300 athletes gathered for this traditional road race organised by Croydon Harriers – who were very pleased with the final results!

The race starts and finishes at Lloyd Park Avenue and the route circles the park's boundary before a twisty, dog leg section from halfway that includes enough undulations to keep things interesting.

There was no let up at the front as Croydon Harriers' Dominic Nolan locked horns with top triathlete Sam Wade (Brighton Phoenix). The leading pair pushed each other to great times as the local man prevailed by four seconds in 31:18 in his first official 10K race.

By some spooky coincidence both Nolan (14:52) and Wade (14:55) had set personal bests for 5K at the Armagh International Road Races on 14 February so the outcome could have been foreseen, although Wade was delighted with his breakthrough as he improved by 96 seconds!

Posting on social media after the tussle, Wade said: “Had a great battle with Dom and pushed each other all the way to the line. I came away with a big 31.18 PB, just a handful of seconds from the win but really pleased to set such a marker on a tough course. 30:00 definitely seems possible over a fast course in 2020?”.

With the team scoring requiring one female member there was further joy for the host club when Croydon's Anna Corby (43:48) finished third in the women's race, behind Irish W40 Caoimhe Nic Fhogartaigh (London City, 39:29) and Alice Germana (Epsom & Ewell, 41:29). This was enough to give Croydon Harriers the team prize on cumulative time.

Race benefits included a quality medal for all finishers, chip timing, spot prizes and awards to the top three and all master category winners up to aged 80-plus.

Results via this link to runABC South race listing here