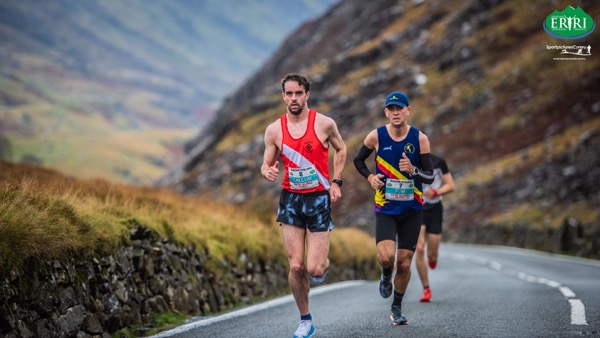 Added to the fact there was an elevation of 3000m across the 26.2 mile route, the field competing at Saturday’s (26 October) Snowdonia Marathon Eryri were forced to deal with some tough conditions with chilly temperatures and a steady downpour for the duration of the day.

Despite this, Callum Rowlinson and Andrea Rowlands both put in fantastic performances to lay claim to victory on what was the 37th edition of one of the best regarded marathons in the UK.

As the race began to develop in the men’s event on the long and steady climb to Pen y Pass at mile 5, it was clear that this was going to be a battle between Salford runner Rowlinson, local man Tom Roberts, Mercia Fell Runner Dan Connolly and last year’s runner-up Martin Green.

By mile 20 however, Rowlinson had established a sizeable lead ahead of his competitors and at one point looked like he could possibly challenge for the 2015 course record. The Salford Harrier crossed the line in 2:34:14, some four minutes ahead of Daniel Connolly (2:38:26) with Martin Green (2:41:18) in third place.

Speaking after his victory, Rowlinson commented: “I can’t believe it. This means so much, and I am not sure how I made it down in the last couple of miles as I am a terrible downhill runner! But to win this race, when you look at some of the past winners, is just amazing.”

It was a far closer affair in the women’s field with Rowlands battling it out to the last with Anna Bracegridle, with the former gradually pulling away during the descent into Llanberis. Rowlands crossed the line in 3:09:18, Bracegridle second in 3:09:54, Danielle Higham taking third in 3:13:23.

Andrea was clearly delighted with her victory at a race she had originally won in 2014: “I am really happy to have won this race again. It’s also a demonstration to others that age isn’t a barrier to success. I am 46 now and I feel as strong as ever to be honest!”

Race organiser Jayne Lloyd was quick to praise not just the winners but everyone involved in the race, commenting: “This marathon never fails to inspire me. It’s my 16th time organising it and each year it still fills me with pride to see the thousands of runners filling the roads of Snowdonia. We saw two great winners in Callum and Andrea today, truly brilliant runs. But this day is not just about great winners, it’s about great people, coming together for so many reasons.”