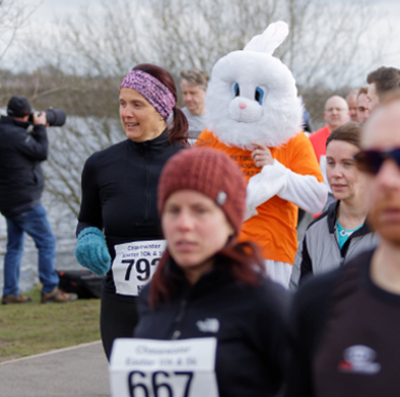 The Easter bunny hopped to it on a chilly morning at Chasewater Country Park joining a record entry of runners who turned out on Easter Sunday for the 10K and 5K races.

Burntwood in Staffordshire was the location for the Chasewater Easter Egg races organised by Nice Work. The event involved running on an undulating and muddy course around Chasewater Reservoir with an Easter medal and goodies to look forward to afterwards. There was an 800m race for children that started before the 10K and 5K and was enjoyed by the youngsters who also received a medal and seasonal goodies.

Wolverhampton & Bilston AC’s Steve Forsyth had a spring in his step, winning the 10K in 36:03. Robbie Campbell of Worcester AC took second place in 36:19. Forsyth’s teammate David Smith was third in 36:26.

In the 5K, it was another win for Wolverhampton & Bilston AC as Daniel Maskew powered across the finish line in 17:14. Chris Baxter was second in 17:38 and James Jennings third in 18:49.

Rebecca Harrison was the first female in 20:45 with Dorota Brynkiewicz coming second in 23:52. Ruth Haines was third in 25:37.

Several runners entered into the spirit of things by wearing an item of fancy dress and there was a fun-filled atmosphere in general with shouts of encouragement from marshals and spectators. Everyone agreed it had been an eggs-cellent event!