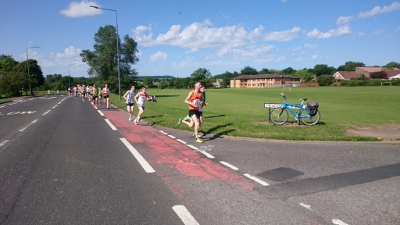 Amongst the generous prize list at the 2020 Aycliffe 10K is £100 for a new course record. The current record – 30:38, set by Martin Scaife in 2001, has stood for close on two decades. Now race director Trevor Needham has thrown down the gauntlet to top local runners to lower the long standing mark.

Martin Scaife's (Chester-le-Street AC) record came under threat in the 2014 race with Indelbu Wondiye Fikre winning in 30:51 – 13 seconds outside the record time. Now organisers are hoping that the fastest runners at clubs like Morpeth Harriers, Gateshead HAC, Heaton Harriers, Tyne Bridge Harriers and Durham Runners will be tempted to aim for the challenging 30:38 mark.

The Hydram Aycliffe 10K & Fun Run takes place on Sunday 21 June starting at 9am from Burnhill Way, approximately 10 minutes walk from Race HQ at Greenfield Community College. It is held on a closed circuit consisting of two and half undulating laps around the town. The main event follows the 3K Fun Run at 9.15am.

10K runners can expect a fully marshalled race with kilometre markers along the way to keep them focused on the course record or on a personal best. The race is chip-timed, again, important for the target chasers as well as those hoping to improve on previous finishing times.

There are prizes for the top 5 men and women, age category winners and two team prizes: £100 for a team of four men and a team of four women. And for anyone wanting a challenge there is £100 for a new course record. There is also a technical T-shirt for every finisher.

Sign up for the Aycliffe 10K & Fun Run via Entry Central.