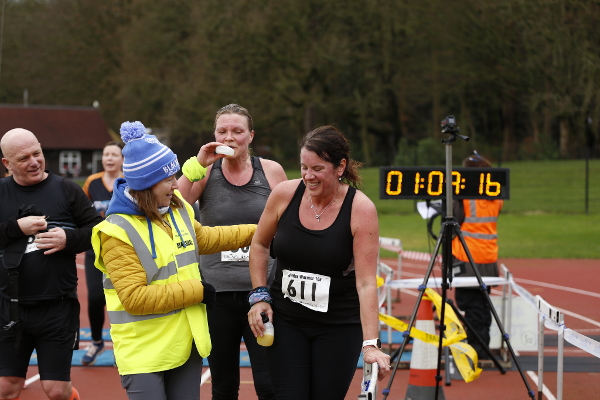 What was possibly the biggest charity cake stall in the land, inspirational marshals and pacers and generous local sponsors made Sunday’s (2 February) Blackburn Winter Warmer 10K a 5-star experience. That despite the unforgettable Buncer Lane.

Blackburn Winter Warmer 10K sold out for the fourth year in succession – a testament to host club Blackburn Road Runners who have a reputation for organising the friendliest event with a carnival atmosphere. A sound system provided musical motivation and club mascot Milo lent his support, adding to the excitement.

There was unseasonably mild weather as 10K runners set off at 11am from Witton Park Arena athletics track. Some of them bounced up Buncer Lane most dug in as they made their way to the top before a downhill stretch through countryside around Pleasington before finishing on the athletics track. Pacers with badminton rackets displaying finish times encouraged those looking for a PB and marshals loudly exhorted them over the line.

A bumper day for Blackburn Harriers in both men’s and women’s races: Karl Billington was the overall winner in 33:07 followed by Jacob Watson in 33:59 then Joshua Holgate in 34:05.

Victoria Mousley was first female in 40:51 with Sarah Ridehalgh of Accrington Road Runners second in 41:49. Rachael Gavin was third in 42:06.

The legendary goody bag lived up to its reputation and main sponsor MGS Plastics continued their support with John Sturgess and wife Andrea helping at the finish. The cake stall, sports massage and podiatry raised over £1,200 for Prostate Cancer UK.

It was race director Nicola Murphy’s first time in charge and in her own words: “An absolute pleasure. It’s the kind of race that leaves you buzzing for days and we enjoy it as much as the runners.”