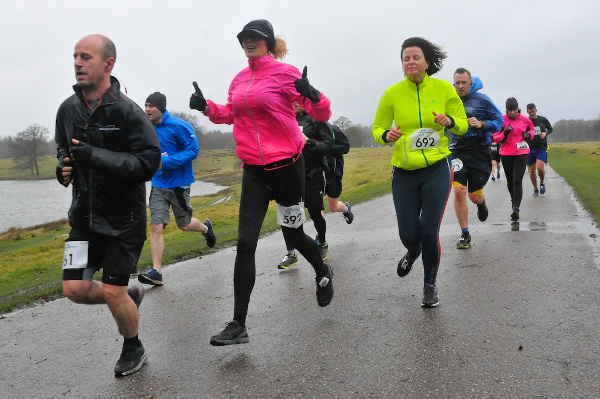 Taking a run on the wild side at Tatton 10K

They are a tough breed in Cheshire as more than 400 runners presented a united front against Storm Ciara at a wet and windy Tatton 10K yesterday (Sunday 9 February). A few changes were made to the course and event village but the run went ahead.

Whilst some race organisers and runners decided to adopt a ‘batten down the hatches' approach that wasn't the case at the Tatton 10K where they decided to face the strong winds and rain head on. The race was advertised as a way to banish the February blues but stormy weather wasn’t on the agenda until the Met Office forecast a couple of days beforehand. Then it was all hands on deck to ensure the event would go ahead.

To do so meant making a few adjustments. The event village and race collection point were moved to within the barns and the course was adapted slightly. Starting at 9am, it was held on closed roads around the Tatton Park estate and steadfast marshals kept everyone moving despite the gales and precipitation.

Rob Samuel of Eryri Harriers stormed to a win in 34:06. Jack Strode of Tri Fit Coaching secured second place in 37:55 with Adam Bradshaw (37:57) only two seconds behind in third.

The resolute finishers were presented with a new themed medal, bottle of water from ACTIPH and tasty flapjacks and fruit.

Next in the series is the Tatton 10K on 8 March. The organisers will be hoping there isn’t another storm...