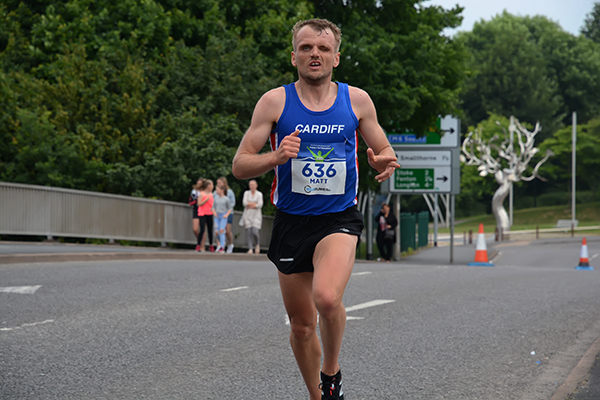 Matt Clowes looked calm and collected as he sped to victory at a sweltering Potters ‘Arf Marathon (Sunday 10 June) while the race had a particular resonance for Paul Swan.

Matt of Cardiff AAC won the Hanley Economic Building Society Potters ‘Arf Marathon in 1:06:53 and set a new course record, making it a double celebration for the Cheddleton runner. He regularly posts 1:05/1:06 for a half marathon on flatter courses, making today’s result even more impressive considering the elevation and the infamous ‘Heartbreak Hill’. Ben Fish of Blackburn Harriers was second in 1:09:18 followed by rising star Felix McGrath of Newcastle (Staffs) AC in 1:11:34.

It was an outstanding display of running from Diane McVey of Wilmslow RC to win the women’s race in 1:24:12. Rachel Naylor of Derby AC came second in 1:30:48 with Michelle Buckle of Newcastle (Staffs) AC third in 1:31:08.

Also taking part was Paul Swan of Stone Master Marathoners who suffered a heart attack in last year’s race but made a strong recovery from this as well as recurring Achilles injuries. He finished in 1:24:44 and won his age category (MV55).

There were many heart-warming stories from people running on behalf of charities. This included a group from Stoke FIT in rainbow colours called ‘Team Hobnobs’ who were fundraising for #LauriesStory. Laurie Ashworth Mills was left paralysed in June 2017 following complications during surgery to remove a second brain tumour. Laurie’s sister Heidi Goodwin and the team have pledged to raise £6,000 for adaptations to her home, enabling her to have the best quality of life possible. Their efforts and the generosity of the people of Stoke have brought them within reach of their goal.