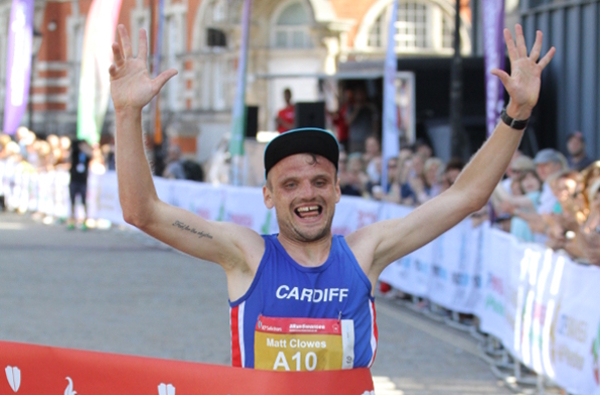 Clowes Blazes To Victory At Swansea

It was a seaside special from Matt Clowes at Sunday’s (24 June) JCP Swansea Half Marathon. Both he and Tracy Barlow were in red hot form at this record-breaking event.

Clowes of Cardiff AAC held off a strong challenge from Swansea Harriers Josh Griffiths and Phillip Matthews to be first across the line in 1:04:43 and a new course record. This victory comes only two weeks after his win at the Potters ‘Arf Marathon, an impressive debut that saw Clowes beat the course record by nearly a minute.

In the women’s race, Tracy Barlow of Thames Valley Harriers was equally dominant, winning in 1:13:50 and posting a new course record. The England international finished ninth overall and second GB lady at London Marathon and has secured her place at the European Championships this August.

Richie Powell won the wheelchair race in 1:02:02. JCP Solicitors were the Corporate Challenge Champions for the second year in a row; Wales Air Ambulance were charity team winners.


Temperatures reached 27 degrees at the fifth JCP Swansea Half Marathon on the newly designed course that was flatter than previously, resulting in a greater number of PBs. There was additional help from Xempo Race Pacing. Youngsters and their parents had their moment of glory in the SHM Family Dash, held on the final 1K of the half marathon course with a big city finish.

Early bird entries have opened for the 2019 JCP Swansea Half Marathon on Sunday 29 June 2019.