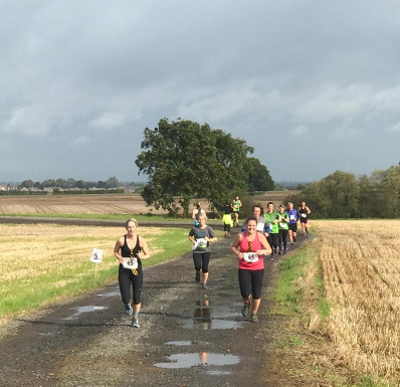 Touch of class at Crossdale 10K

Around 300 runners went back to school for the 20th Crossdale 10K Trail and Fun Run on (Sunday 6 October). Two famous ex-pupils lent their support to this special event.

Crossdale Drive Primary School in Keyworth, Nottinghamshire was the venue for this off-road 10K that together with the 2.5K Fun Run was open to individuals, youngsters and families. All of whom were given the opportunity to run through stunning areas of the countryside in the South Nottinghamshire Wolds normally closed to the public.

The event was organised by the school PTA and fundraises for the charity ‘Friends of Crossdale Primary School’. Several members of the committee are runners and participate in local races including Robin Hood Marathon and Keyworth Turkey Trot Half Marathon.

Former Labour politician and high profile runner Ed Balls wished his old school well on Twitter and encouraged people to lace up their running shoes and enter. Olympic gymnast Sam Oldham got the 20th birthday celebrations off to a flying start: he led the warm up, set off runners in the 10K and Fun Run, handed out medals and spent time signing autographs and posing for photographs.

10K runners followed an undulating, out and back route on bridleways and footpaths, gravel tracks and grass. They made their way in muddy good fashion before finishing back at the school.

Daniel Glover of Woodbrook Vale won the 2.5K Fun Run in 08:16; Elizabeth Morley of Sacred Heart was the winning female in 09:22.