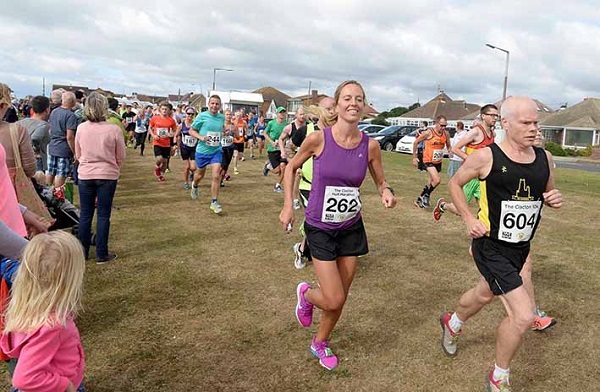 Who will be 'Best of British' at Clacton?

A traditional British seaside resort will host a popular half marathon and 10K road race on Sunday. Runners will be heading for the Clacton-on-Sea Carnival on Sunday (18 August), where the theme this year is 'Best of British'.

After the carnival parade; fun dog show; car boot sale; craft fair and displays of dance, cheerleaders, dog agility and sideshows around 600 runners will take to the seafront for the universal racing distances of 13.1 miles and 6.2 miles – as the Best of British imperial measurements would have it.

Last year the half marathon drew 396 finishers in 3:11:37 with Charley and Andrew Barrell, Nick Deacon and Abigail Williamson crossing the finish line together beside Fourth Avenue to close the race.

It was a similar story in the 10K, where the course records remained intact. These are still owned by Paul Whittaker (Southend AC, 32:59) from 2016 and Rachel Doherty (Higham Harriers, 40:48) since 2017. The latest winners were Kieran Hayles (Sudbury Joggers, 36:54) and Sarah Gruber (Invicta East Kent, 42:28) who rejoices in the nickname 'The Grubernator'!

Although the races are very much part and parcel of the Clacton Carnival they are organised by Nice Work Event Management and the start time of 9:30am gives a reasonably clear run on the out and back promenade course. The Half Marathon is two laps and the 10K is a single loop, with both mile and kilometre markers and plenty of course marshals.

There is a bespoke medal for all finishers and the Clacton Carnival Fun Run appeals to those who are too young or too modest to compete for 'Best of British' honours in the main races.

Race and entry details are available at Nice Work here