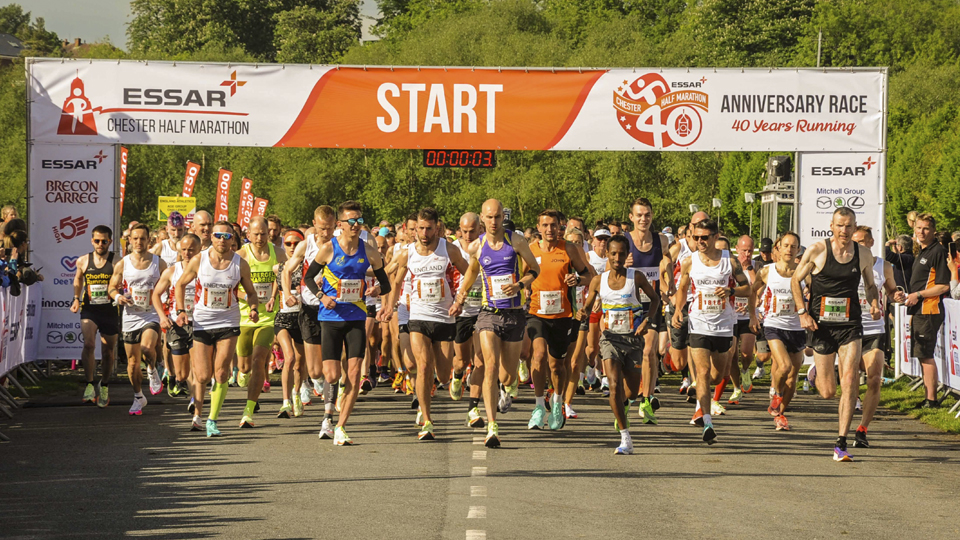 Essar Chester Half Marathon celebrates its 40th in style...

The city streets were awash with colour on Sunday as 4,000 runners took part in the special 40th anniversary edition of the Essar Chester Half Marathon. To mark the special occasion, the race was started by Dr Basil Thompson who was one of the organisers of the very first Chester Half Marathon in 1982. He was accompanied at the prize giving by local Marathon Champion Jonny Mellor.

The event, which continues to draw in entrants from far and wide, took the runners through the heart of the city in its early stages and then out into the South Wirral countryside before finishing in front of thousands of spectators in the city centre where runners received special commemorative T-shirts and medals together with their very own celebration cake.

Joint race organiser, Chris Hulse commented: “The warm conditions did not daunt the runners and were ideal for the army of spectators who turned up to watch the action.”

Alice Braham said: “It was the first time I have run here in Chester and there was something really special in starting and finishing in such an historic city centre. I also loved running in the countryside…the support on the course was brilliant!”

Chris Hulse continued: “The runners are expected to raise a phenomenal £500,000 for charity this year. I would like to thank our title sponsor Essar and associate sponsors Brecon Carreg, Mitchell Group, Innospec and High 5. We could not host the event without the support of our sponsors and amazing volunteers who make participation in the race such a memorable experience for the runners."

Race director Andy White summed up the day by saying: “I think we can say we marked this special occasion in style and are delighted to be back to our traditional time of the year.”

Entries for the 2023 Essar Chester Half Marathon, on 21 May, are already open, for information visit the Active Leisure Events website.