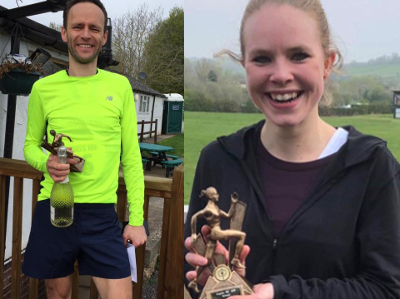 There were heavenly wins for Cheltenham & County Harriers Richard Dare and Rachel Underhill at Sunday’s (7 April) Angels 10K but it was a close run thing for Underhill in the women’s race.

Shona Crombie-Hicks had won the women’s race for five consecutive years from 2014 to 2018, making her the odds-on favourite for the title this year however Rachel Underhill held off a strong challenge from the Tewkesbury RC member and crossed the line in 38:59 – only six seconds separating her from Crombie-Hicks who finished second in 39:05.

Richard Dare was the winner of the men’s race in 34:28 followed by Stephen Millward of Gloucester AC in 34:43. James Rose of Severn AC came third in 36:25.

The winning pair were amongst a field who took part in this friendly race in Gloucestershire organised by the all-female Angels Running Club. It was the third event in the popular Gloucestershire AAA County Road Race Series. The event was staged in an attractive location complete with views of the Cotswolds, Malvern Hills and the River Severn.

The race started at 10am from Woodpeckers Cricket Club in Ashleworth and featured an undulating, circular route comprised of quiet country lanes that included the tough Hasfield Hill. There was a much-welcome drinks station at the top of this hill.

The men’s and women’s winners were each presented with a superb trophy and there was an angelic medal for every finisher. This was followed by refreshments in the Cricket Club.