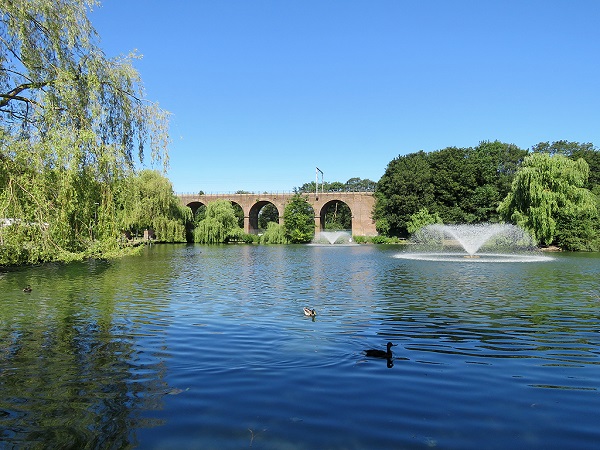 Emma Prideaux, of Billericay Striders, took her unbeaten record in the Chelmsford Marathon to four successive wins since 2016 but this was her fastest yet. A record 615 finished in just under seven hours in this annual fund raiser for The J's Hospice held on Sunday (20 October).

Emma Prideaux joined 21 men in beating three hours on the scenic, single-lap course that starts and finishes in Chelmsford's Central Park, bordering the River Can and featuring a tranquil lake and the impressive 18-arch railway viaduct constructed in 1842 (see above).

Central Park is the venue for Chelmsford Central parkrun, where Emma Prideaux is the W45 category record holder (17:55) set in August this year – a PB she was to improve to 17:47 at Bushy parkrun three weeks later to underline her form going into Chelmsford Marathon.

Essex cricketers Kelly Castle and Sam Cook started the race in the High Street and runners travelled from Serbia, Kenya and USA to compete.

Chelmsford Marathon is organised by The J’s Hospice which cares for young adults living with complex or incurable conditions across Essex. The charity supports them and their family throughout illness, death and bereavement, enabling them to retain their independence, in the comfort of their own home and through support groups in the community.

Lucy Burgess, events fundraiser for The J’s Hospice, said: “The J’s Hospice relies on public support to continue our work. We hope to have raised £60,000 which will make a real difference to the lives of the young adults that we care for and their families so thank you to everyone for your generous support.”

Havens Hospices promote Chelmsford Marathon with race management by Nice Work and the same team are also behind the popular Southend Half Marathon and Santa Run in Basildon.