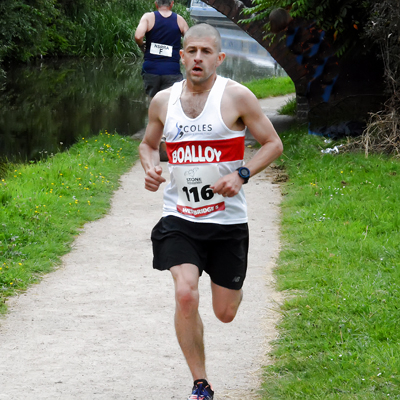 It was a successful morning’s work from Boalloy RC’s Carl Moulton at yesterday's (Sunday 2 June) Westbridge 5. He and teammate Neil Tapp took first and third at this fast race.

Part of the week-long Stone Festival, the Westbridge 5 is a multi-terrain event organised by Stone Master Marathoners (Stone MM) and race number eight in the North Staffs Road Runners Association (NSRRA) programme. Chip timed by Andrew Vickerman Event Timing with race commentary by Ken Rushton it was a slick operation from beginning to end.

Race director Mark Churton conducted the briefing before nearly 200 keen runners set off, at 9.30am, in humid conditions to follow a flat course consisting of grass, tracks, towpaths and a section of road. They ran around Westbridge Park then alongside the Trent and Mersey canal towards Aston by Stone before returning to the park and the finish.

Carl Moulton looked strong from the outset, winning in 26:55. Daniel Soltys of host club Stone MM was second in 27:39 followed by another Boalloy runner – Neil Tapp who came third in 27:52.

There was an impressive display of running from Amy Neill of City of Stoke AC who was the female winner in 32:15. Joanne Stanfield of Trentham RC was second female in 34:18 and Gillian Russon of Cannock & Stafford AC third female in 35:58.

Bottles of wine were presented to the top three men and women and age category winners and pottery mugs to the NSRRA group winners. £500 was donated to ‘Friends of Josh’ – a local charity who support people with mental health issues.