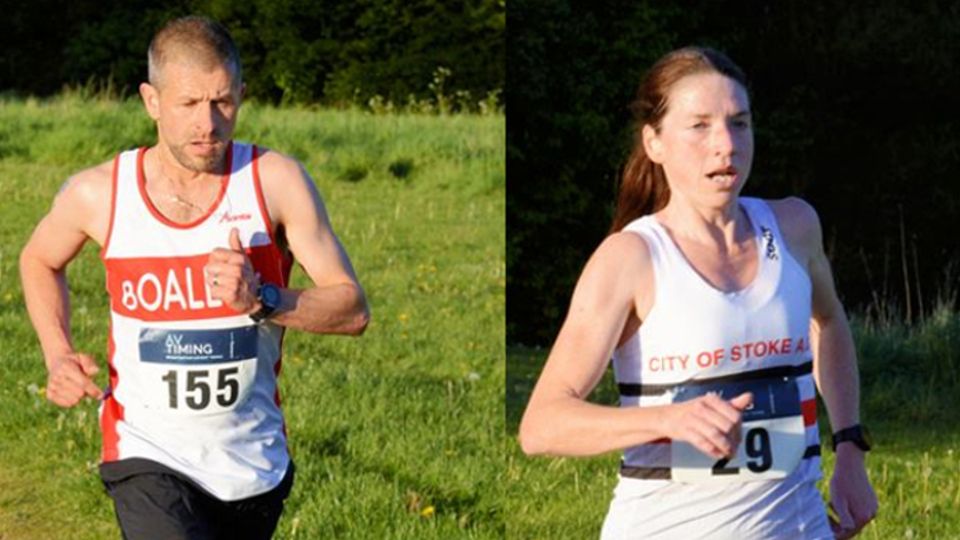 Victory for Moulton and Butler at Clayton 10K

This follows their winning performances a week and a half ago at the Uttoxeter Half Marathon.

Carl Moulton and Kelly Butler were in winning form again, this time at the mid-week Clayton 10K (Wednesday 11 May). They powered their way around the undulating to hilly two lap course in Newcastle-under-Lyme at a race that returned to normal.

Both the 2020 and 2021 Clayton 10K were held as virtual events but it was business as usual on Wednesday evening with a well organised and supported race from Roger Smith and Blythe Bridge RC. Part of the NSRRA programme of league races it always attracts a good turnout from the local running community who were happy to see it return to its live format.

Runners gathered in the evening sunshine on a grassy area close to Clayton Library that also acted as the finish. Chairman Ken Rushton set everyone off at 7.15pm from where they headed out onto the road and up Dartmouth Avenue with more climbing up Seabridge Lane. There were shouts of encouragement and applause along the route from spectators and marshals – the latter very efficient at keeping runners safe whilst ensuring traffic was able to pass by without any problems.

There were prizes for the top three men and women plus male and female age group winners. Finishers received a medal handed out by helpful youngsters at the finish.

Kelly Butler was the first female in 38:08, finishing more than three minutes ahead of Georgia Stanfield who was second in 41:54. Stoke FIT’s Amanda Kelly was third in 42:34.

Browse through the full set of results via the runABC Midlands Race Listings page.

Carl and Kelly are on the start list for the Westbridge 5, the next race in the NSRRA programme taking place on Sunday 5 June.