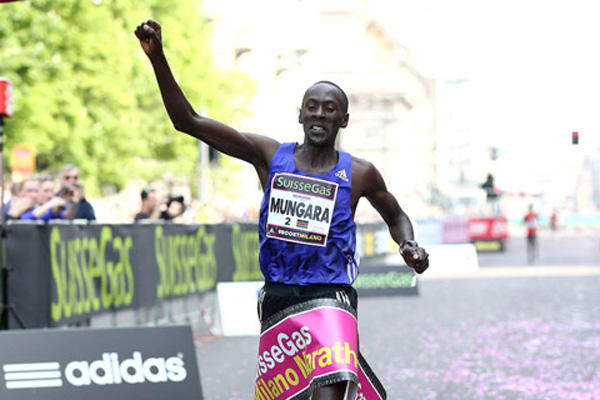 Three Kenyans with big marathon pedigrees stand between Callum Hawkins and his dream of a Commonwealth Games medal. Two of those fancied Africans - Kenneth Mungara and Nicholas Kamakya - already have victories at the Gold Coast Marathon on their CVs while the third Julius Karinga Nderitu has a PB of 2:08:01 and won the Copenhagen Marathon last year.

The 44-year-old Mungara (pictured winning Milan Marathon in 2016) is the favourite. The father of six won the Gold Coast Marathon in 2011 and finished second here last year in a respectable 2:09:04. There doesn't seem to be much between the other Kenyans although Nicholas Kamakya has a PB of 2:06:34 from 2011 and ran 2:11:35 at Hannover last year. Nderitu (42) is another veteran with a PB of 2:08:01 from 2012 and was in winning form last year in Copenhagen where he lowered the 30-year course record.

Mungara is the Gold Coast Marathon record holder and three of his 20 races over 26.2 miles have been on the stretch of road between Runaway Bay and Burleigh where Sunday's race will be run. However the modest Kenyan doesn't believe that experience will give him a significant advantage saying: “Everyone running is a winner and this is the game in which one needs to play well all the time, otherwise winning is not possible. It is about the training for the race and then racing well.

Despite the quality of the opposition Steve Cram believes that Callum Hawkins has a great chance of a medal: "Callum has a great racing brain. He’s proved he can compete on the big stage so this won’t faze him. The weather could play a role. The race is scheduled for 8.15am local time, but it will get hotter as it goes on."

The other qualities Hawkins has in spades are grit and composure and he has been pleased with his extended preparation in Australia after finishing third to Mo Farah in the Big Half in London on 4 March.

The Commonwealth Games Marathon takes place on Sunday 15 April, the final day of GC2018 (23.15 UK time on Saturday 14 April). Starting and finishing at the spectacular Southport Broadwater Parklands, this course will take athletes to a northern turn at Runaway Bay, on a flat and scenic route to a southern turn at Burleigh Heads, before a final stretch back to Southport for the finish.

Local runners get a chance to join in the fun with 6,000 plus expected to take part in the Gold Run, a 5k community fun run that starts and finishes at the marathon start line. This is the first time that a community participation event has been included as part of the Commonwealth Games.