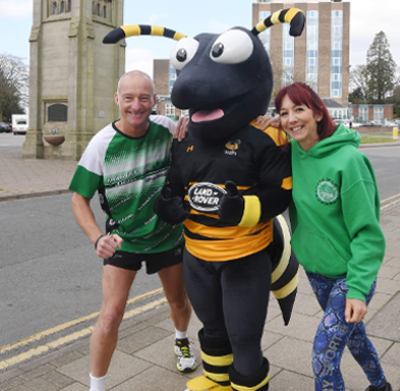 Buzzing at the 20th anniversary Kenilworth Half Marathon

The new course was one of several highlights of the Wasps Kenilworth Half Marathon on Sunday (1 September). There were sharp wins for David Hudson and Kelly Edwards.

Wasps Rugby Club sponsored the sold out 20th anniversary Kenilworth Half Marathon and gave every runner a pair of free tickets to the first home game of the season. Club mascot Sting lent his support along with one of the players, Tom Willis and the Mayor of Kenilworth Alison Firth.The race was organised by Kenilworth Runners who demonstrated their eco-friendly credentials by going plastic-free, i.e. providing biodegradable cups at the drinks stations and using electric cars during the race.

There was no sting in the tail on the new route that had been changed from an out and back to a two-lap undulating affair that included Kenilworth Castle although only on the first lap. Marshals and spectators cheered everyone on and a team of pacers helped runners to an all-important PB.

David Hudson of BRJ won in 1:09:29 and posted a PB, both of which boosted his preparation for Berlin Marathon later this month. Patrick Roddy of Thames Hare & Hounds was second in 1:10:51 with Ian Allen of Spa Striders third in 1:13:23.

The finishers were presented with a special anniversary medal along with the Wasps-themed black and gold long-sleeved tech Tt-shirt, match tickets and a goody bag. Organisers were grateful to Wasps Rugby and the other sponsors for their support.

Image courtesy of Kenilworth Half Marathon.