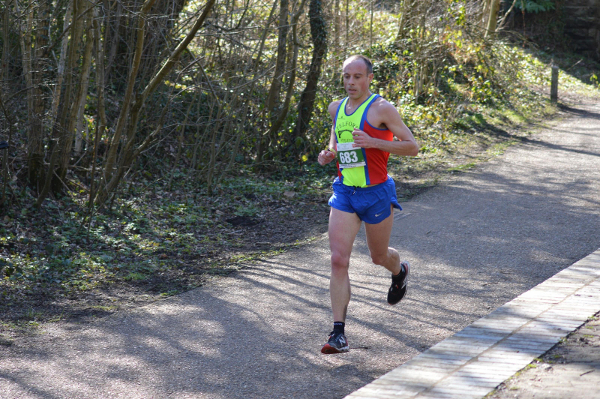 Bowie Is The Star Man At Ironbridge

Telford AC’s Jon Bowie was in sparkling form at last Sunday’s Ironbridge Half Marathon (Sunday 25 March). He was first across the line on a day when everyone was a hero.

In the women’s race, Claire Martin of Telford AC showed she is equally at home on the road as cross country, winning in 1:23:15. Kim Fawke of Lawley Running Club was second in 1:26:08 with Sara Willhoit of Shrewsbury AC third in 1:32:04.

Mark Taylor of Telford Triathlon Club was the midpoint runner in 2:01:29. A full set of results can be found on our race listings page.

The sun shone on 762 runners who completed the 2018 Ironbridge Half Marathon organised by Telford Harriers and sponsored by Bronze Labs and Busch UK Limited. They set off at 10am from Telford Town Park Arena and followed a hilly route with various historical features including the old Severn Valley railway line, the Tile Works/Museum and the famous Iron Bridge.

This one lap course went in a loop around the town where there was plenty of support from marshals and spectators along with water and jelly babies to keep everyone going until the end. Many runners used the race as preparation for London; others had entered on behalf of a charity and for some, it was their first time at this distance. They were rewarded with a technical T-shirt, bespoke medal and an eye-catching goody bag that was worthy of an award in itself.

Next year is the 30th anniversary of this popular half marathon.