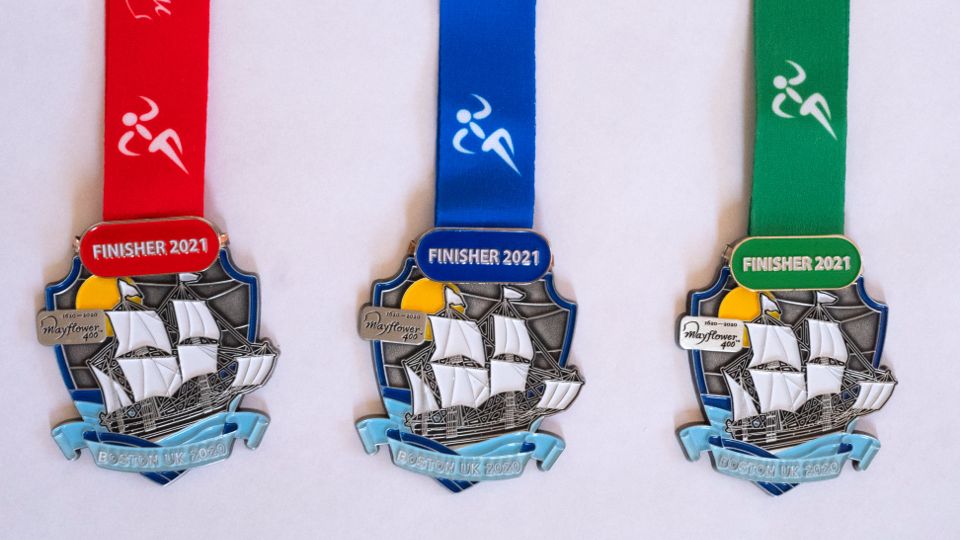 Plenty to celebrate at this well organised and supported event.

It was a successful voyage for Monday’s (31 May) Boston UK ‘Mayflower 400’ Marathon as runners soaked up the course, atmosphere and the bank holiday weather. Everyone was glad to be taking part in a live event again and there was no shortage of encouragement along the way.

Flat, fast and friendly, these words sum up this well run event that marks 400 years since the Mayflower and the Pilgrim Fathers embarked in 1620 on a journey to freedom in the New World. They landed in Boston, Massachusetts two months later where they established a colony.

Closer to home; there were start waves for the Marathon, Half Marathon and Fun Run based on estimated times and runners congregated in socially distanced groups before being set off from the Market Place at 10 minute intervals. This efficient system was preferred by some to the usual mass start.

They followed the flattest marathon course in the country on a very warm, sunny day – the latter clearly taken into account as there were more than enough water stations manned by enthusiastic marshals. The marshals were supportive along the route as were the people of Boston who came out to clap and cheer runners as they made their way before finishing at Boston College.

William Strangeway of Lincoln Wellington AC won the Marathon in 2:22:45 followed by Jordan Skelly of Gainsborough & Morton Striders in 2:25:02. Ian Allen of Spa Striders was third in 2:25:42.

Abbey Van Dijk of South Derbyshire Road Runners was the winning female in 2:47:59. Caroline Brock of Steel City Striders RC was second in 2:55:13 and Genevieve Huss of Serpentine RC third in 3:00:16.

In the Half Marathon, Simon Birch of Hinckley RC was the winner in 1:07:35. Nicholas Barry of Sale Harriers Manchester was second in 1:07:43 with Kristian Watson of Heanor RC third in 1:08:05.

Emma Hodson of Cambridge University was the women’s winner in 1:17:16. Charlie Hanson of Lincoln Wellington AC took second in 1:18:05 and Georgina Weston of Rotherham Harriers and AC third in 1:22:09.

A full set of results can be found via the runABC Midlands Race Listings page.

Every finisher received a Mayflower themed medal, bright red tech t-shirt and water.  Many of them vow to return in 2022.