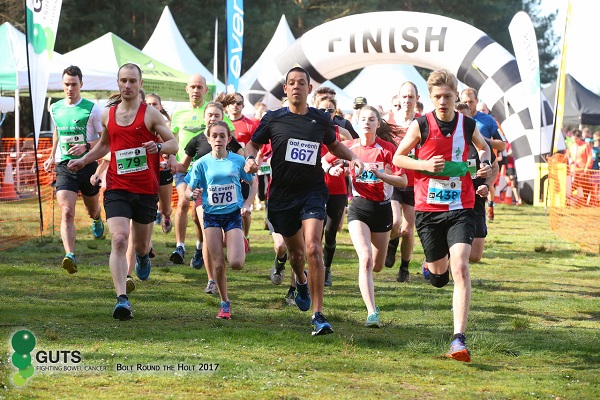 Show Some Guts And Do The Bolt

Alice Holt near Farnham, Surrey is a royal forest that once supplied the timber for building Royal Navy ships. Now it is part of the South Downs National Park and a fabulous setting for the 10th anniversary Bolt Round the Holt cross country races on 24 March 2018.

Since the inaugural races in 2009 some 16,566 runners have covered 70,215 kilometres on the man made forest trails and have raised nearly £100,000 for the charity Guildford Undetected Tumour Screening (GUTS – Fighting Bowel Cancer).

The family friendly, traffic free event in Alice Holt Forest has become a must do fixture for runners of all abilities in the south of England. The race programme features a 21k, 10k, 5k and 1k (for kids) and the three longer events are based on a 5k lap in the woods. The race venue is the wonderfully named Bucks Horn Oak – which is more than just a one tree village!

Rory Macpherson, race director and Nerissa Deeks from GUTS, said: “The venue and routes are perfect for all, from those just getting into running to seasoned running veterans. Now the redevelopment of the new visitor’s centre in Alice Holt Forest has finished it is even more supporter friendly, which is perhaps more important than anything else and will help make our 10th birthday even more special!”

Nearest train station is Farnham and parking facilities are available near the start. Prizes will be provided by Fitstuff Guildford, and Canicross competitors are welcome. The longest race has a novel 21k Team Challenge – a minimum of two and maximum of four simply divide the laps among themselves and at the end of each stint pass the timing chip onto the next runner.