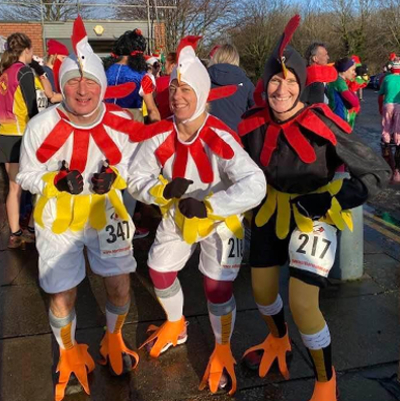 There was no chickening out by runners when they faced a sharp climb at the half-way point in Sunday’s (15 December) Loftus Poultry Run. However they were rewarded with an energising downhill stretch to fly along to the finish.

Loftus & Whitby AC have organised the Poultry Run for more than 30 years and it has a reputation as a friendly event that is open to the fun runner and the competitive racer alike. The 8 mile test took place in wintry weather including snow on the roads and hills that added to the festive atmosphere.

Costume is an integral feature of this race and quite a few runners showed their creative sides, appearing as Snow White and the Seven Dwarves and a complete scene from the Nativity (including baby Jesus). There were a few, free range chickens on the run too.

The event started at 11am from Loftus Leisure Centre as over 400 runners followed a multi-terrain route on roads, bridleways and footpaths and through fields. They gradually ascended for the first half and the steep hike up to Boulby mast before taking wing as they descended to the finish at the Leisure Centre.

Aidan Rigby of New Marske Harriers was the winner in 46:05. Michael Joyeux of Quakers RC took second in 46:41 with Rigby’s teammate Nicholas Barber third in 46:58.

There were 420 finishers who enjoyed a glass of sherry and a mince pie or two and were presented with a long sleeved T-shirt. A vote winner in those conditions...