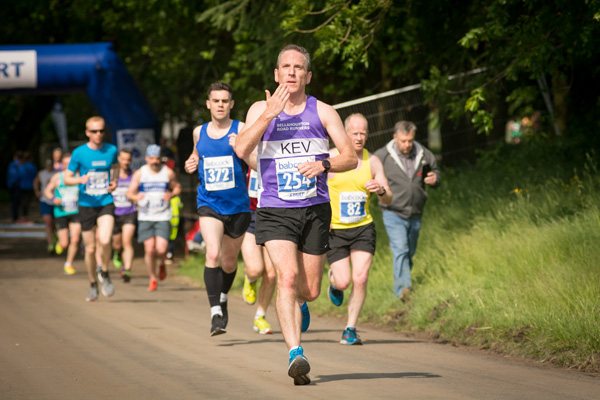 Katie White completed the Babcock 10K treble when she added the Babcock Shettleston 10K at Glasgow Green on Sunday (27 May) to her previous series successes at Helenburgh and Dumbarton. The Garscube Harrier had set a course record in Helensburgh and then held off a resurgent Elspeth Curran (Kilbarchan) in Dumbarton.

This time the gap between the pair was just five seconds with 3 kilometres to go but once again White’s strength and resilience paid dividends as she held on for a well-earned victory by 14 seconds in 36.20 to Curran’s 36.34. White and Curran also took gold and silver in the West District Championships, which were incorporated in the event.

Meanwhile in the men's race Corstophine’s Calum McKenzie ‘gate crashed’ Shettleston’s party on the Green when he ran away from a high quality field. His time was a modest 31:38 in the warm conditions, when temperatures nudged 20 degrees centigrade by the 10 am start, but his victory was emphatic as he surged away in the final stages from last year’s champion and series record holder, Weynay Ghebresilassie, from host club Shettleston Harriers. Ghebresilassie represented his native Eritrea in the London 2012 Olympics in the steeplechase at the age of 18.

Weynay’s record of 30:11 was never under threat but McKenzie produced a mature performance to consolidate his rise to the top level. Improving steadily through schools and junior ranks, he was eighth in last Winter’s Scottish National Cross-Country Championships.

Stephen Trainer of Greenock Glenpark Harriers, the winner of the Babcock Dumbarton 10k last week was just edged out by Ghebresilassie for second in 32.08 to 32.10. These two took gold and silver respectively in the West District Championships.

The ever consistent, American runner, Mike Deason representing Shettleston finished fourth and picked up the Babcock 10K series title and a bonus of £125, following his second places in Helensburgh and Dumbarton. Craig Ruddy held on well for fifth after his win in Helensburgh and third in Dumbarton. He lost out to Deason by a single point for the series prize.

Paul Sorrie was the third counter in sixth place as Shettleston easily took the men's team title with only 12 points. Greenock Glenpark were second and Inverclyde third.

Sponsors Babcock were well represented by Team Clyde runners out in force. Simon Foster, managing director Babcock Clyde said: "This year’s Babcock 10K series has involved more than a hundred runners from the naval base joining up to run for Team Clyde. That’s a significant increase from last year and a very positive result for us. The added benefit is that in the Year of Engineering we will use our association with the race to launch a number of activities for young people in the local communities where the races have taken place."