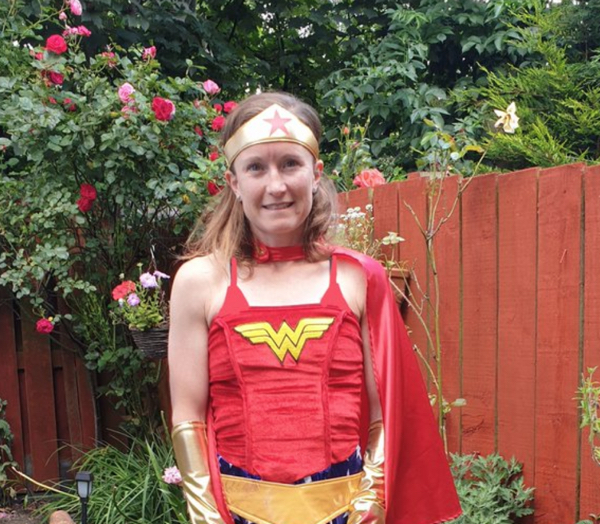 Aly Dixon will put her superhero status into practice by dressing as Wonder Woman at the upcoming Great North Run. The Sunderland Stroller has set her sights on breaking the Guinness World Record for the fastest superhero to run a half marathon.

What’s more, Aly will be making the attempt less than a week after she represents Great Britain at the IAU 50km World Championships in Brasov, Romania. She will be wearing the British vest there alongside Julie Briscoe, Helen Davies, Danielle Nimmock and Hannah Oldroyd.

Aly will be running to raise funds for St. Benedict’s Hospice and her fundraising efforts are going strong. Her motivation for the challenge came about at the start of the year after she was asked to be an ambassador for the charity.

Aly explains further: “In 2012 my cousin, Andrew (25), was cared for by the staff at the Monkwearmouth facility in his final few weeks. Then in 2015 the fantastic community team cared for my Grandad Tommy during his last few days. And most recently, just at the back end of June, the community team once again cared for my Uncle Bill before he sadly passed away.

“Each time the care and support given to the patients and my family was second to none. The community team was on call 24 hours a day and they were amazing. We need to raise vital funds to support these services along with the added services which the Hospice provide.

“My role as an ambassador is to help raise the profile and support fundraising events. So far I've drank gin, ate biscuits and ran Sunderland Half Marathon. Now I aim to break a Guiness World Record!”

You can support Ali and her world record attempt online at Just Giving.