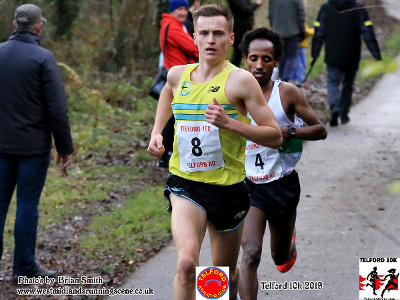 Scottish national cross country champion Adam Craig showed he is as talented on the road with a win at the Telford 10K yesterday (Sunday 08 December). He held off a fierce challenge from Omar Ahmed.

Telford has again, been rated the fastest 10K in the country based upon its PB-potential: beating favourites such as the Leeds Abbey Dash 10K, Cheshire 10K and Wilmslow 10K amongst others. The flat, traffic-free, two lap course around Telford Town Park always attracts an elite field of runners for this very reason.

23-year old Adam Craig was one of those in contention for the title. As was Omar Ahmed who won the Percy Pud 10K last Sunday (1 December) in 29:00, breaking the course record of 29:13.

In the Elite Women, Samantha Harrison and Dani Chattenton were amongst a highly competitive field looking to do well.

Craig and Ahmed shot away from the start and pushed the pace all the way around the Town Park. Ahmed was on Craig’s shoulder but the Inverclyde/Team NBMCR member held him off to win in 28:32. Omar Ahmed of Birchfield Harriers was close behind, finishing second in 28:39. Last year’s winner Callan Moody of Serpentine/New Zealand was third in 28:57.

Samantha Harrison of Notts AC won the women’s race in 32:33 with only four seconds between her and Dani Chattenton of Milton Keynes Distance Project who finished second in 32:37. Clara Evans of Cardiff AAC finished third in 33:07.

There were 1123 finishers at this well organised event from Telford AC and praise for marshals and supporters with a special ‘thank you’ to the team of pacers in the masses race. They helped many runners to a pre-Christmas PB.