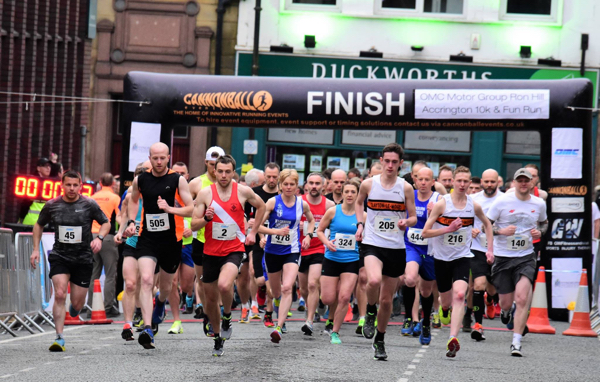 If you ever wondered how highly regarded Dr. Ron Hill was in his hometown, the 80-year-old’s welcome at Sunday’s (22 April) Accrington 10K, which came hand-in-hand with thousands of photo requests, far outweighed the reception any Hollywood celebrity would have received.

Organised in honour of Dr. Ron celebrating his 80th year, the race saw close to 400 runners make their way from Blackburn Road, just a short walk from Market Hall, to tackle a course that had been modified from 2017 to allow for an even faster profile.

The changes clearly had the desired effect with a host of competitors posting PBs. Top of the field was Salford Harriers’ David Rigby who followed up his strong showing at last month’s Chester 10K with victory in 31:31. Blackburn Harriers’ Ben Costello (35:19) and Nick Gaskell (36:03) were his closest rivals.

Pauline Powell, also of Blackburn Harriers, was the convincing winner in the female field in 38:36, a time that placed her eighth overall. Claire Vincent (43:39) and Sophie Pilkington (44:05) followed.

The day, however, belonged to Dr. Ron, whose presence clearly lifted all of those taking part and attracted many hundreds of spectators.