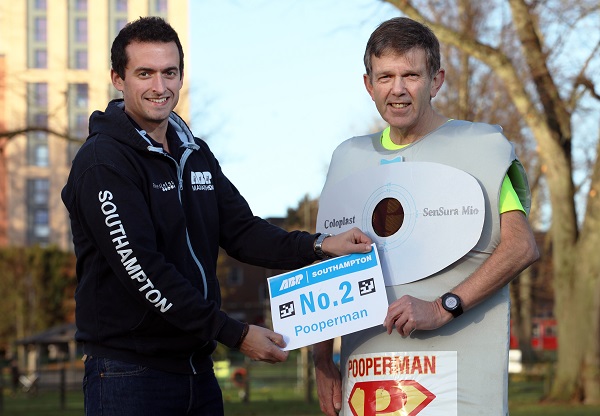 Mike Sharpe is a man on a mission to lift the lid on a taboo subject. The Southampton runner and colitis sufferer has pledged to run ABP Southampton Half Marathon dressed as a man sat on the loo, to raise funds and break the stigma associated with inflammatory bowel diseases.

The announcement was timed to support Crohn's and Colitis Awareness Week, which takes place from 1-7 December, and the aim is to raise significant funds for Crohn’s and Colitis UK. Mike, aged 57 from Netley, is no stranger to unusual race gear as he has previously run the ABP Southampton Half Marathon under his alter ego of 'Pooperman', once dressed as a giant toilet roll and once as a giant ostomy bag (see photo). However, his running toilet seat outfit will be his most ambitious project to date.

‘Pooperman’ said: “There’s such a stigma attached to talking about diseases that affect our bowels and we need to change that. The more it’s a taboo subject, the less likely people are to speak up and visit their doctor. If you pick it up early you have a better chance of avoiding operations so it’s a no-brainer that we should be doing all we can to encourage people to talk about it.”

Mike was diagnosed with ulcerative colitis in 2015 after suffering from stomach pains while on holiday. His condition was so severe that he had to have his large bowel removed; the procedure took four hours and meant he had a stoma and had to wear an ostomy bag. He went back under the knife a year later for reconstructive surgery and had an operation to remove the stoma five months after that.

Thanks to the operations and careful management of his condition, Mike’s quality of life is hugely improved. While he’s hit a few bumps in the road, which have led him back to hospital, he can regularly be found running around Southampton. Earlier this year he was at his local parkrun the day after leaving hospital, where he was treated for a serious blockage.

“I enjoy running and won’t let it beat me,” he said. “I won’t give in to this bloody disease”. Mike says that part of his mission is to inspire others with inflammatory bowel disease and to reassure them that a diagnosis doesn’t mean they can’t keep fit. “Half of what I’m doing is to prove to people that you can still be active and do things when you have colitis. If I make one person feel better about wearing an ostomy bag or getting a diagnosis, then I’ve done my job.”

Organisers are so impressed by Mike's courage and his mission that they presented him with a special race number for the next event – an appropriate number two! Race director Chris Rees said: “The verdict from our team is unanimous – Mike is an absolute legend. His dedication to running, particularly considering the medical challenges he’s faced, is second to none and we’re thrilled he’s using our event to send an important message. He may be No.2 in the race but he’s number one to us!”

Mike is training hard for ABP Southampton Marathon which takes place on May 5, 2019. To sponsor him visit his Just Giving 'Pooperman' page here

To take part in the ABP Southampton Marathon, Half Marathon or 10k visit the race website here