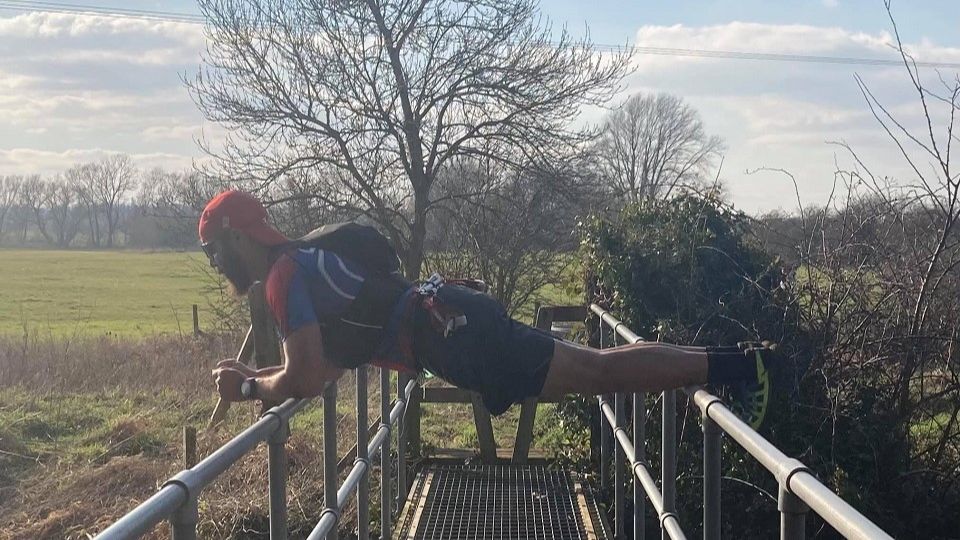 This story will warm the cockles of your heart. Over the weekend (27-28 February) hundreds of 'Lone Wolves' and 'Wolf Packs' ran 100kms – yes, that's more than 62 miles – in a virtual challenge to raise more than £20,000 to provide 10,000 hot meals for underprivileged people.

Lone wolves and wolf packs? This was a huge community effort by members of the Wolfpack – a charitable group of extreme endurance event enthusiasts started in 2016. Lone wolves are solo runners and wolf packs are teams of up to 10 who run in a virtual relay, so their distance adds up to 100kms. The 100kms could be run by lone wolves continuously or in intervals throughout the 48 hours.

Our pictured wolf (above) is shy and retiring Mike Bullock (North Herts Road Runners) who stopped for a 'rest' in the time-honoured plank-on-a-bridge pose during his 100km route along the Icknield Way and Kingfisher Way long-distance footpaths in Hertfordshire.

We thank Mike's wife and fellow wolf pack member Sue for the image, shared on the Fly 5K Facebook group after Mike had opened his account with a 5K split in 29:15. Sue and Mike had decided to complete their 100kms in one go on Saturday because in Mike's own words: “Saturday Kitchen was pants and there’s footy on tomorrow”!

There were many extraordinary efforts over the weekend. Lee Bonsey Jones bagged five Trig points in the Welsh mountains as he completed 107kms and scaled 8,954 feet in 14 hours 9mins 40sec – while carrying a 35lb pack! This real-life superhero tabbed with bib number 100 to commemorate his achievement.

Every runner had their own personalised race number to print and wear. All finishers received a bespoke completion medal and every entry fee included a donation of 10 free hot meals for families on low incomes via FareShare charity

Although this was a challenge rather than a race, an online awards ceremony will be held to celebrate the achievements of the wolves. Wolfpack awards will be given for the best off-road photo; best team photo; the fastest 1K split; best fancy dress and best Strava art.

The event proved to be such a success that it will be repeated at the end of the month (27-28 March) and again next year (19-20 March 2022) for those who need a little more recovery time.

Visit the Wolfpack 100 Crew Facebook page here for the full story of this astonishing challenge.

Visit The Wolfpack Facebook page for details of future events.