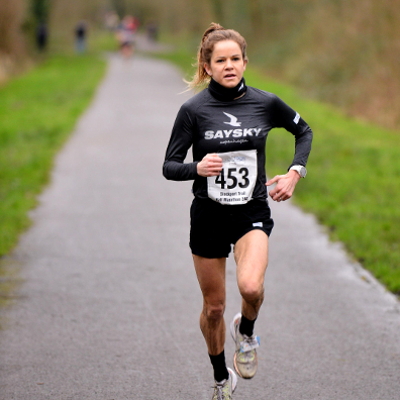 Winning way for Whyman-Davis at Stockport Trail Half

First female and third overall was just what the doctor ordered for Eleanor Whyman-Davis at Stockport Trail Half Marathon (Sunday 16 February). She was in the flow along with more than 400 others on towpath and trail.

Whyman-Davis won the women’s race at January’s Essar Four Villages Half Marathon and the elite runner and NHS doctor was in a healthy condition on Sunday. Stormy weather threatened to disrupt the sold-out Stockport Trail Half Marathon but relented at the last minute enabling organisers Crazy Legs Events to continue.

Conditions were muddy underfoot as expected following recent precipitation especially on sections of the towpath. The course included the Middlewood Way - an off-road cycling and walking route along the former railway line from Macclesfield and Marple - and the Macclesfield Canal.

It was chilly and wet on Sunday morning and Crazy Legs Events were mindful of this, posting vital pre-race briefing points in the Race HQ to avoid runners standing around in those conditions. At 9.20am everyone headed down to the start on the Middlewood Way ready to set off at 9.30am.

There was no stopping Joe Mercer of Horwich RMI Harriers who was first across the line in 1:14:13. Jack Schofield of Congleton Harriers wasn’t far behind him, finishing second in 1:14:29 and a classy performance by Eleanor Whyman-Davis who finished third in 1:19:46 and was the winning lady.

Charlotte Ward of Hallamshire Harriers was second lady in 1:24:45 and Caitlin Rice of Glossopdale Harriers third in 1:27:37.

Bill Shone of Crazy Legs Events praised the runners for their efforts and reserved a vote of thanks for the marshals, suppliers and supporters: “You were absolutely fantastic and it made a huge difference on the day.”