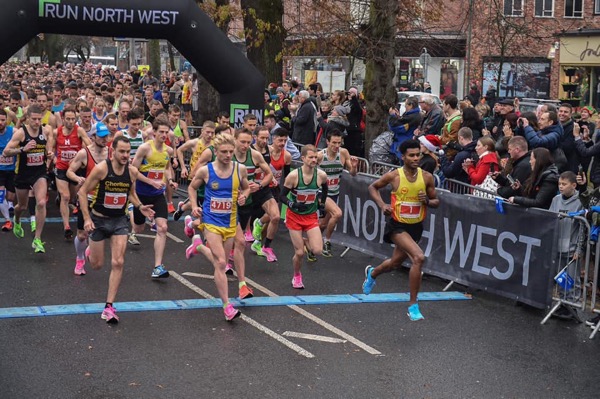 Wilmslow welcomes 4000 for biggest event yet

The success of the Wilmslow Festive 10K may well be down to the fact, in part, that it appeals to such a broad spectrum of runners: Sunday’s event attracted a field of over 4000 competitors, from seasoned athletes chasing a PB to festive fundraisers looking to raise funds for their chosen charity.

Organised by Run North West, the team behind the Alderley Edge 10K and Trafford 10K, the Wilmslow race has quickly established itself as one of the most popular festive events in the region. For each of its three years, the race has had to increase entry capacity to keep up with growing demand.

Sunday’s event saw participants tackle a fast, point-to-point course which moved out of Wilmslow, along Knutsford Road before heading back round to Burleyhurst Lane and finishing on Mobberly Road.

As anticipated, it was tight at the top with the top seven runners finishing in under sub 30 minutes. Just edging it was Mohammed Abu-Rezeq, who, after enjoying a fine 2019, added another title to his collection with victory in 29:45, marginally ahead of Gavin Hill (29:53) and James McMurray (29:53).

With defending champ Eilish McColgan not competing, the women’s field was wide open and it was Preston Harriers’ Kirsty Fraser who took advantage by claiming first in 34:38. Sale Harriers’ Katherine Wood was second in 35:24, with Joanna Marsden third (35:58).

A statement on the Run North West Facebook page thanked everyone for their participation: “What an incredible morning to celebrate the Wilmslow Festive 10K! Thank you to everyone who made today so special and of course to all of our amazing runners! With over 4,000 finishers today was the biggest Wilmslow 10K yet!”